Why we write? Money and only money?

Before we begin our update according to the title of this weblog entry let's cover a more constructive aspect of our society viz. our highly skilled diaspora:
Amongst the Professional Cream of AJK - Professor Surgeon Maqsood Abdali:
.........
We now move on to an issue - the news of which - spread like wildfire throughout AJK and its diaspora. Sardar Shameem Khan was intent on disgracing all the politicians of AJK - bar none - for what he described as their insincerity towards the 'Kashmir Cause' and their unbridled corruption. His idea was that he wanted to tar their faces (with spray paint) on the various billboards littered throughout AJK. He would carry out the acts himself but wanted someone to make video footage of the activities.
As no one else was willing to do this for fear of reprisals; on his suggestion I gave it a thought and concluded that dissent was a powerful feature of democracy and this was a novel - and peaceful - way of trying to bring our politicians to account.
Here's an assortment of videos from April, earlier this year:
At Sehnsa and then Holaar (our border with Pakistan):
The second of 2 videos at Holaar:
After a couple of days, we moved on to Khuiratta from Sehnsa and Holaar. That is, from the 'cold border' (with Pakistan where no cross firing takes place) to the 'hot border' (the LOC where Indians and Pakistanis exchange fire at will in our territory):
What transpired from here was my first arrest in my own territory by my own police. Hitherto, I had spent 6 days in Adiala jail (Rawalpindi, Pakistan) in January 2008 for asking the Pakistani foreign office to be clear in its policy vis a vis Kashmir and not just spew rhetoric and platitudes. I had also been picked up by the Pakistani army and taken by its agencies to their country in August 2011 for 'interrogation', only to be released after c. 36 hours.
The violence didn't end at the police station in Khuiratta, it continued when we were taken to the district headquarter hospital in Kotli, as can be gauged from the following videos:
Version 1:
Version 2:
Meanwhile, a campaign for our release had been mobilised in our diaspora in the UK:
Link whereby various videos and updates are available on the 'Justice for Tanveer and Shameem' Facebook page.
Here are a couple of - in action - photos too: 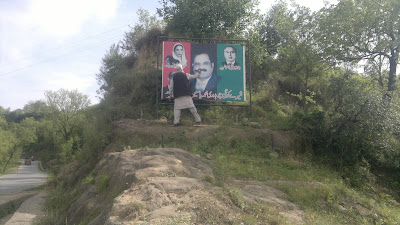 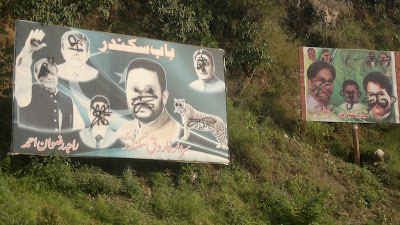