I felt too tired to wake for Sehri (pre-dawn meal before closing fast in Ramadhan), even though I slept outside the hotel inches from a dinner table and half a dozen vigorously munching souls. I eventually got up around 6am and felt relieved to find my mini-laptop still plugged into a socket in a discreet corner of the hotel. I was also pleasantly surprised that the hotel owner insisted on only charging 50 rupees, that too for dinner last night.

There wasn't much electricity to shout about the night before though I remember an invigorating conversation I had with a couple of youth, whom I surveyed at the hotel last night. They were fully conversant with matters of public concern and had urged me - in much the same manner as others have done before them – to institutionalise my efforts. A work-in-progress and difficult without a secure channel of funding, I took great pains to explain to them.
My first day of walking on a 'Citizenship Walk along the LOC' was modest compared to the standard I'd set myself to reach Tao Butt (northern most habitation in AJK) in about six to eight weeks. I could only walk five kilometres or so southwards from Mo-il to Chamb, despite wanting to walk further to Manawar. The two lads I'd met last night – true to their word – came to visit me in Chamb and insisted that I travel with them on a motorbike, I reluctantly agreed.
The video (link attached above) is of us in Manawar, where the area was still reeling from the murder of a mohajir (migrant from the other side of the divide post-1947) by a local. In discussion, I also learned that the areas of Chamb and Manawar were apparently taken by Pakistan in it's 1971 conflict with India. Much of the land in this region belonged to local Hindus prior to 1947 and was taken over by local Muslims who would have hitherto been land tillers or servants. The mohajirs were not able to take possession of land (certainly not in the quantity that they would have been entitled to) from locals. A modicum of tension has persisted between these two categories of people since 1947.
When we returned to Chamb I was invited to a prominent local shrine known as Khairowal Durbar. It was an opportunity to sample a spiritual yet festive rural environment where I interacted with many people who had come from far and wide, including my own district of Kotli. The spiritual head eagerly suggested that I spend the night there. I accepted his invitation.
The evening livened up particularly after iftaar (breaking of fast in Ramadhan at sunset). I had maintained my fast despite not availing of sehri and tempered my thirst by showering with what seemed like ice-cold water gushing out from a heavy-duty motorised tube-well on three or four occasions during the day.
There was zero interaction with 'authorities' on this day.
at August 22, 2011 No comments: 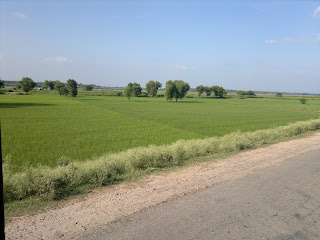 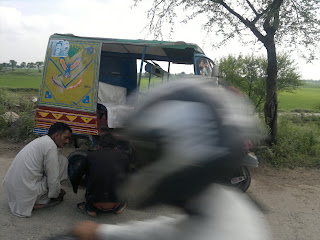 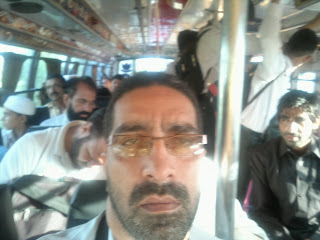 I originally toyed with the idea of starting my walk from Shakergarh (in Pakistan's province of Punjab) along the international border which corresponds with Kathua, the southern-most urban centre of our State which lies in Indian-administered territory. Taking time and other matters of a practical nature into account, I revised it to travelling on public transport from Sialkot to Manawar (where the southern-most point of Azad Kashmir begins).
Barely 30 kilometres – as the crow flies – from Jammu, Sialkot is a busy city in Pakistan's Punjab province and was a major migration hub for the Muslims of Jammu province in November 1947. Many of them had narrowly escaped massacre at the hands of Hindu mobs, who in turn were enraged by countless stories narrated to them of Muslim mobs killing Hindus and Sikhs in what became known as Azad Kashmir. I wanted to give myself a sense of orientation of our State (as a whole) and develop some insight into the impact of 'borders' on our freedom to move.
This took me via Chapraar and Saidpur to the Chenab River (Head Maralla) and Phagwal before I entered our State at Manawar late in the evening. I put up for the night at a hotel in Mo-il, a dozen or so kilometres further north. During the day, I had been questioned by the police as well as an army unit near the Chenab River without incident.
My journey enabled me to engage in conversation at every opportunity with the public of Pakistan as well as those inhabiting Azad Kashmir. There was little to differentiate them in terms of language and culture, nevertheless a difference in political status was acknowledged by both Pakistanis and 'Kashmiris' (As per norm, I use the word generically to represent all inhabitants of the erstwhile Dogra State of Jammu & Kashmir). The bus driver driving us into Azad Kashmir was enquiring from experience when he politely asked of my origin. “This is a 'border area' and the security agencies have made us paranoid of all strangers that travel with us,” he apologetically explained.
at August 22, 2011 No comments:


Here are some further snippets that come under the banner of aspirations and grievances...


"So many countries have come into existence since ours was occupied...."


"........Both (America and China should support an open-ended plebiscite on Kashmir......The politicians imposed on us are willing to sell anything for power and they are powerless from doing anything genuine for us....Iran, Saudi Arabia and Turkey should also take notice (Though the former two may try and drag us into one of their camps). We were happy that China did something to recognise our independent status..which is more than can be said of Pakistan which rather than replicate China's gesture, has been busy in not differentiating between it's own citizens and ours. We are very disturbed by Pakistan's inaction and inexpression on so many pertinent issues related to our aspirations and grievances."


"Kashmir is 'Jannat' (paradise on earth) and 'Jannat' cannot be 'Jannat' if it's not peaceful...the world must take the bulk of responsibility for addressing this issue.....otherwise many more innocent will die.......(most will be our citizens and particularly our youth) and we cannot afford losing another..........not anymore..........not anymore (for Jannat's sake)."
at August 10, 2011 No comments: