Hectic travelling from South to North of AJK and back prevented me from blogging in the past couple of days.......my routine is still consistent with good shape but my challenges are ballooning.....let it be.......what is life without intensity?

The following interview - conducted a few days ago - is my first major interview since release from prison:

This is my 6th daily blog on the trot which indicates that I'm well on my way to resuming my pace as it was before imprisonment. In fact, all indications are that I will surpass that level at some stage very soon.

Email ThisBlogThis!Share to TwitterShare to FacebookShare to Pinterest
Labels: Dadyaal

Building blocks to develop 21st century governance can be as long as eternity without the desired outcome or as short as weeks and months with a desired outcome. The odds in AJK are in favour of the former outcome but that is where sheer grit, consistent determination and pure will can always change the course of history.

Each and every moment - both passive and active - can count and matter. Such is the dynamism of the age.

The following is a just and valid point:

At times when there are very difficult decisions to make in life, one actively seeks inspiration.

Meanwhile, my routine is coming along well. Consistency derives its own pleasures.

Slowly but surely gelling everything together.....

Email ThisBlogThis!Share to TwitterShare to FacebookShare to Pinterest
Labels: Sehnsa

Its never easy getting back into a daily working routine but one has to make the most of what is available in terms of time, energy and resources. That's how it has always been for most of humanity's existence here.

Multi-tasking and a high volume of communicating with others are major challenges......

This has probably been one of my most productive days since release from prison on the 19th of June - which seems a long time ago - not least because of my self-imposed seclusion. I needed to clear my head so that I can have the best shot at what remains to be the rest of my life. Long or short, the result must be constant and a pattern of output in tune with the thoughts and actions required for the 21st century.

Here's a tribute to a legend that took me along his path, from the man most qualified to present this tribute, his active son:

As touched on already, it was a busy day at the office today. It took us to Neelam and back but not without some healthy diversions to other parts of the world. We live in the connected age after all.

A Prime Example of how the Pakistani State indoctrinates our population en masse from a very young age to adopt its nationalist narrative while suppressing our own indigenous nationalist narrative, yet it claims to have a 'principled' stand of advocating self-determination for the people of Jammu & Kashmir 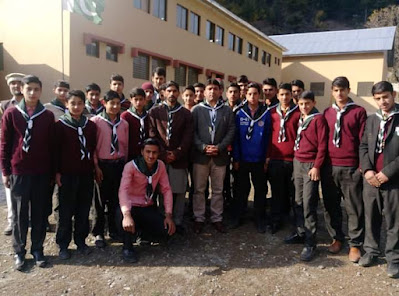 On the 20th of August at Dudhnial Government High School an assembly took place as usual at 0800hrs. What was unusual was that some students of the 9th class decided to react to the Pakistani State's imposed activity of regularly chanting "Kashmir Banega Pakistan" (Kashmir will become Pakistan) with "Kashmir Banega Khudmukhtar" (Kashmir will become independent) in defiance.

One teacher in particular, namely Saboor Iqbal (16th grade but yet ad hoc meaning that his employment was still tentative) became furious at this reaction and immediately brought out a register and demanded to take down the names of all those students who chanted the latter slogan.

These 'rebellious' students were separated from the others and expelled from the assembly. Saboor Iqbal further threatened them with expulsion from school and also suggested that the police be called and these students promptly be handed over to them. At this point lab assistant Malik Mumtaz went even further and suggested that rather we should call the Pakistani army and they should lathi (baton) charge these 'offending' students of the 9th class, all of whom were under 16.

An example of indoctrination at school assemblies throughout AJK below:

Note: It is clear from the slogans that Pakistan is conflated with Islam to give children the impression that they are one and the same, whereas Islam is a universal message for humanity and for its adherents a matter of faith, dignity and spirituality. Meanwhile, Pakistan is a country like 200 or so other countries in the world which all have common secular challenges and responsibilities to their citizens, which cannot be abdicated from or wished away under the cover of religious sentiment and affiliation.

What followed over the next few days was tantamount to torture for these students and others (older students) who emerged in their support. Threats from the school administration ensued to not raise the issue/incident elsewhere - including social media - to keep quiet and effectively consider this repression and suppression as the will of Allah (rather than the will of the Pakistani State which when push comes to shove is every bit as suppressive and repressive as the Indian State vis a vis Kashmir).

These children were also censured by their family and some friends to not make an issue of this, as it would lead to further trouble for both students and teachers alike.

This gave the impression in some quarters of civil society that the students were not taking a stand while activity on social media as referenced below mainly gave a feedback of outrage against the behaviour of the school's administration.

Ideally, schools should not be venues for political sloganeering but this is customary and compulsory throughout AJK. The Pakistanis wish to leave no stone unturned to promote and protect their nationalist narrative in this territory, which they describe as disputed. Thus, they are keen to project to the neighbourhood and the outside world alike that everybody here in AJK is keen for Kashmir to become a part of Pakistan. Making Pakistanis out of our children from the outset is thus a primary objective of theirs.

For the majority of the population in AJK (as corroborated by various public opinion polls including the most extensive and representative survey conducted by this writer), this is an insult to our children's freedom to think and on a broader scale the right of the people of Jammu & Kashmir to exist as an independent entity on their own terms, not unlike how India and Pakistan crave to exist.

Students and their close sympathisers in Dudhnial strongly feel that such strong-arm interventions and suppression in AJK's educational establishments should be challenged, otherwise matters will get further out of hand. In particular, that the authorities will take even more liberties with children in future. Thus, they demand that either an FIR (First Information Report) be lodged with the police against the teachers in question, in reference to the threats and harassment received by the students, or that the teachers be suspended or that they apologise to the students.

When enquiries were made before compiling this report we learned that the ad hoc 16th grade teacher Saboor Iqbal who seemingly instigated this issue claimed that an 'official' notification to the effect that only the slogan of 'Kashmir Banega Pakistan' (Kashmir will become Pakistan) can be chanted in school has been circulated. We did try to obtain the aforementioned notification but the school hasn't obliged despite assuring us that they would do so.

We also learned that the children were threatened again on the 24th of August (a day after initially compiling this report). It was reiterated that nobody can raise the slogan of independence inside or outside the college. Further, that if they did so they - the students - would be 'picked up' etc.

Local activists of the region have had detailed interaction with the school authorities as well as the district administration in pursuit of redressal. They feel that there is suppression on both sides of the State of Jammu & Kashmir without a doubt whereby students and teachers alike are compelled to chant slogans in favour of the 'occupiers'. That this is a primary means of controlling their respectively 'held' territories.

According to the school authorities and district administration they are forcefully bound that in any institution no separatist/independent organisation or ideology is to be tolerated. Further, that they are compromised by their necessities of work viz. they are not in a position to resist the instructions given out from time to time by the agents of the Pakistani State. In their opinion, they are not the ones compelling the students given their livelihood compulsions.

On their part, they reason that they explained to the students to not do anything that will become a problem (danger) for both of them viz. the teachers/admin and students alike. As indicated earlier, relatives of students also play a role in scaring children against resistance and independent advocacy, not least because they are well aware of what possible repercussions may emerge on the part of the deep Pakistani State.

In conclusion, this writer would earnestly advocate that schools are not a place for political propaganda, irrespective of whatever ideology is being propagated. Enforced chanting of political slogans will cause a reaction like it did in Dudhnial, Neelam Valley. Resistance in AJK is now beginning from a younger age and even in the remotest and most 'sensitive' of areas, where hitherto resistance had proved most expensive for locals (viz. being 'picked up' tortured and denied habeas corpus by Pakistan's clandestine agents). That fear is rapidly eroding in the digital age.

It emerged that the teachers and admin staff at Dudhnial High School decided to apologise for the harassment they meted out to the students referenced above. They said that henceforth no political slogans (irrespective of ideology) will be shouted at the school and that they sympathise with the student's aspirations. In fact, they hold similar views - viz. Kashmir should be an independent territory - but for the over-riding governance structure in AJK - viz. a compulsion to promote and adhere to Pakistan's nationalist narrative on Jammu & Kashmir - thus, such unfortunate incidents occur.

We on our part, hope that the rest of AJK's educational fraternity can take lessons from this incident and refrain from making students shout political slogans in educational institutions throughout AJK.

The following declaration was announced on the 13th of August at Malmo in Sweden. I consider this to be a significant step enacted by global civil society in recognising our status:

Right to water is akin to right to life and the Pakistani State is denying this right to the people of AJK:

(2347hrs: Is when I began writing but a bit of diversion made me miss the midnight clock)

It has taken me 49 days to re-initiate contact with my social media network. Life before jail and after jail is very different. Gladly, for a lot more positive reasons than negative. Every danger is an opportunity. None more so than now possibly.

The public of AJK is a lot more alert today than it has ever been. It is eager for a cue in the right direction but needs never before accomplished administrative management of its public affairs. It doesn't want to be washed away like the Indian controlled part of Jammu Kashmir & Allied.

I didn't plan to have such a long break (21 days) from daily blogging but it is a fact that my health has not recovered from almost 10 months in prison and 13 hunger strikes.

Recently, I even undertook a gruelling journey of 913 kilometres in 8 days. From district Mirpur to district Neelam and specifically up to Sharda. I didn't feel it so much during the journey as I am doing now. My health has a distance to go to recover.