This is how it ended:

It will be difficult to personally acknowledge each and every person who raised their voice in support of our release from six days of unjustified detention. However, we will try and capture some of what our co-citizens did on our behalf:

Some made a valiant effort to describe my work and me, in my absence:

I would like to thank PNA for their moral support. They were quick out of the blocks on this one:

We strongly condemns arrest of Journalist Tanveer Ahmed @sahaafi & Mehmood Musafir.Its a clear dictatorship of Paki lent officers who are actually Paki viceroys in POK.We are warning POK govt @farooq_pm @PIDAZADKASHMIR not to act like a circus monkey in their hands #StandWithPNA
— JKPNP (@JKPNP3) October 25, 2019


For the record, I would also like to thank the following:


I appreciate the creation of the following Twitter handles too:

The following is also an honour:


Voices were raised in London too:

In an example of yet another diaspora voice, Iftikhar Rajput is a hard hitting Urdu writer who is famed for his stern criticism of many individuals who advocate 'Kashmir' in the public domain, was equally generous in his praise for my work:

This is how it is in Jammu & Kashmir, on either side:


This would be a by-product of such conditions:


Translation of the Urdu text:

(Last) night I received a call - with a description of private number on it - and I was threatened over sharing a post in reference to the barbarity that took place in Muzaffarabad (particularly on the 22nd of October). If I incur any loss then the ISI (Inter Services Intelligence) and MI (Military Intelligence) will be held responsible.

I have personally witnessed the destruction caused by the Baghliar dam on Chenab. Constant landslides, rockfalls, drownings, dirty water upstream from the backflow. Loss of land, livelihood & environment...All without any infrastructural benefits in the neighborhood districts. https://t.co/rIpTJPFvk6
— Faridi, A. (@aamacademic) October 28, 2019

This is the letter that was written on behalf of me to the Divisional Commissioner Muzaffarabad on the 30th. In it, I had requested the AJK government to begin seriously pondering the requirements of an internal political process. I suggested that a committee comprised of 4 MLAs (Members of the Legislative Assembly), each representing one of the 4 following tribes viz. Gujjar, Jaat, Rajput and Sudhan should be present along with 3 women active in public life and familiar with public affairs. Each of these women should represent one of the 3 administrative divisions of AJK viz. Mirpur, Muzaffarabad and Poonch:

The following event last night was a continuation of a series of public activities in AJK, since the 5th of August 2019:

The following news item was based on an interview I gave this morning, in reference to the importance of why a local IG (Inspector General) is needed to guarantee AJK's security:

Here is that interview:

Our message to all concerned:

Can we generate such seriousness in public interest here in AJK?

As dusk beckoned and ignorance of the powers-that-be in AJK persisted, I was forced into action:

We strongly condemn the acts of harassing & pressuring @sahaafi 4 reporting #PNA March. It’s his professional duty to cover every activity in society.His data & other belongings been taken from his house & police refused to launch FIR.He is protesting at Lal Choak @farooq_pm @UN pic.twitter.com/p9IN7oHNkB
— JKPNP (@JKPNP3) October 25, 2019


Here's a more detailed explanation of why I'm protesting in the manner that I am:

This is about 2 hours into my protest:

The following interview was the sole interview conducted of me while I was perched up about 35 feet above the ground in Laal Chowk:

Laal Chowk in Muzaffarabad remains the centre of attention.

A 700 year old sanctity has been broken and will prove very very expensive:

The following is an apt reference from the 22nd of October, 2019:

When I say the IG of AJK must be a local citizen, I really mean it. See you at Laal Chowk:

Meanwhile, a bit of blow back by the AJK diaspora for the Pakistani State's antics in Muzaffarabad a couple of days ago, outside the Pakistani embassy in London, UK:

It is clear from AJK Minister Mushtaq Minhas's response that all responsibility for what happened in Muzaffarabad on the 22nd was the doing of Pakistan's agencies. He euphemistically described them as 'idaarey':

As the evening darkens at Laal Chowk:

After all that peace building, we have to deal with the following too:

#HeavyShelling of #IndianForces on the local population in #neelumvalley, #AthmuqamSector. Reportedly 02 civilians killed in Lala village and several injured.
Today, #Pakistan and #India agreed to open #KartarpurCorridor but #Kashmiris are being given a blood bath on same day. pic.twitter.com/K82pVDhSFm
— Farhan Ahmad Khan (@TheFarhanAKhan) October 24, 2019

Our approach to humanity should not be misread:

We r not against #KartarpurCorridor .Jammu Kashmir is a multi religious state & we are victims of “religious trade”,we want India & Pak 2 live peacefully & progress. We will not allow them to occupy our state,using us “fodder” 4 their proxy war #StandWithPNA @UN @BBCUrdu @RT_com pic.twitter.com/xZs2GgPPZ6
— JKPNP (@JKPNP3) October 24, 2019

Here's just the beginning of what happened yesterday:

The journalists of Muzaffarabad also took out a rally today - from Bank Road to Azaadi Chowk - to protest against the police's attempt to storm the central press club yesterday evening:

The BBC also reported on this ferocious attack on press freedom in AJK:

Protests were also triggered in other parts of AJK today, over what transpired yesterday:

A beautiful morning on the banks of the Kishenganga in Muzaffarabad. A huge contrast to this day in 1947. 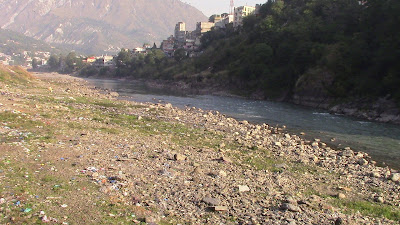 While all hell broke loose in Muzaffarabad in the afternoon, a young Kashmiri Pandit woman was preparing her testimony of the internal J & K narrative for a congressional hearing in Washington, later today:

As the following tweet of the 24th of October is directly related to the video above, it is added here for meaningful context:

Meanwhile, what we didn't want to happen happened. Here is an activist taking cover in a graveyard while our police were commanded to disperse the PNA crowd with tear gas:

The dispersed crowds made their way to other points in the city where they had an advantage over the police. In this following notable event at Chela - on the main road road between Muzaffarabad and Neelam - the public felt no option but to prevent an entourage of UNMOGIP vehicles returning from Neelam Valley, from proceeding back to their office, at least not before they promised to file a report of today's brutality:

In the heat of the moment, some members of the public passed on unconfirmed reports of further deaths of civilians. It should be clarified that only 1 casualty occurred as a direct result of police baton-charging and shelling ref. Qazi Aslam. However, many dozens were injured, some seriously.

There is some speculation that the Pakistani State wanted to avoid embarrassment in front of the UN and hence they took the measures they did to prevent PNA's rally from proceeding beyond Laal Chowk - through the city - to the Assembly Secretariat. In other words, they were fearful that the PR (Public Relations) effort they had put in to take UN officials to the Neelam Valley, in order for the latter to observe the damage inflicted by Indian firing/shelling in the preceding days, would be washed away when the very same UN officials would observe thousands of civilians in AJK marching and protesting against Pakistani occupation.


It is assumed that they were anxious that the Pakistani mono-narrative imposed in AJK would be further exposed!

AJK's diaspora - particularly in the UK - was very quick off its feet in not only condemning what was happening in Muzaffarabad but also in arranging a demonstration in the UK, to counter Pakistan's behaviour in AJK:

As if what the police had done in the afternoon was not enough, towards the evening they decided to storm the central press club while the PNA leadership were inside, in discussion with journalists:

Yet another trek northwards towards the capital of AJK and beyond
at October 21, 2019 No comments:

Email ThisBlogThis!Share to TwitterShare to FacebookShare to Pinterest
Labels: Muzaffarabad

Preparing for another visit to the LOC. This time in Smaahni sector.

Meanwhile, many of my co-citizens are gearing up for:

Refreshing our memories of life pre 1947:

We cannot take our eyes off Gilgit Baltistan. Not least because it is the most strategic part of the erstwhile territory of J & K:

Everything isn't fine in #GilgitBaltistan. It would be dangerous to ignore the public's genuine demands. Mainstream Media is not reporting Gilgit-Baltistan properly.
Shabbir Mayar,a leader of #CivilSocietyBaltistan was arrested 2 days ago.#BabaJan has been in jail for many years pic.twitter.com/cIkdGLQ9FC
— Farhan Ahmad Khan (@TheFarhanAKhan) October 18, 2019

Trying to put words together to describe the experience of the past 3 weeks away from home....

This is an example of indirect democratic representation of AJK in a mature Western democracy. We understand that Irfan Shabir originates from Rawalakot:

Missed out on yesterday's entry without even realising until the early hours of this morning, while driving back - down South - from Muzaffarabad.

I would describe the following as 'pro-activism'. That is, anticipating the threat level for public rights activism in AJK:

Canada:South Asian Peace Forum wrote a letter to intl HR orgs including HR Pak,foreign offices of North America & EU informing them about #PNA ‘s #MuzafarabadMarch21Oct19 .SAPF requested them 2 make sure that Pak & POK govt must not stop or use any kind of force against marchers pic.twitter.com/U1dkHwtRo9
— JKPNP (@JKPNP3) October 17, 2019

The following quote is symptomatic of our status:

It is unfortunate that the land of Gilgit Baltistan has always been fertile for foreigners but detrimental for locals.

Amongst the last speeches of the JKLF 'Freedom March' from the 4th of October to the 16th, by its president (AJK & GB Zone) Toqeer Gilani at Jaskol, in the presence of the AJK prime minister yesterday:

For the sake of clarity and context, here is the relevant portion of the video footage where words were exchanged between the PM of AJK and myself:

(Interjection from someone close by: "Tanveer Sahaab").

The women of Jammu & Kashmir will choreograph our deliverance from occupation. Parveena Ahangar is one of them:

Pushing on..even from a position of standstill......We were denied entry to Chakothi bazaar 3 days ago. Our purpose was merely to investigate the sentiments of the local people, in relation to the dharna (sit-in protest).

Today we decided to use some moral pressure in numbers (34 co-citizens in total) to convince our local administration to explain to the 'shadows' operating in this territory without legal reference, to not obstruct public interest here.

The police at the containers offered to take us to the DC (Deputy Commissioner), who they insisted was all-powerful in making such a decision to allow us (3 co-citizens and 2 policemen) to proceed to Chakothi. Of course, the DC isn't all-powerful at all. The latter also ensured that he wasn't available......we made a fruitless trip to Chinari and onto Hattian without a trace of him anywhere.

In the late afternoon, the following news emerged:

The UN delegates visited and met the JKLF leadership at the UNMOGIP office in Muzaffarabad, not the LOC at Chakothi. Apparently they cited the reason as not being able to obtain an NOC from the Pakistanis!

Isn't that farcical? A country that has no legal status in J & K is able to dictate whether or not UN delegates can visit any given part of AJK, even if the AJK prime minister is inviting them!

Another female perspective taken yesterday. This lady was also on a 24 hour hunger strike at the time of interview: