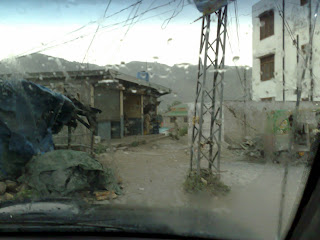 Here's a Urdu couplet that somebody recently recited to me, opining that it summed me up in a nutshell.

It's time to move on from the accomodation that we've been in since last week. Although the old man has decided to agree to my terms and there is mutual regret in our parting, I decide that a more functional living space within the city and in close proximity to the PM's residence would suit my family and I better.

I decide to spend a couple of hours with the 90 year old old man in search of a few pearls of wisdom. We agree that consumerism and rural flight has dramatically altered the lives of people and the natural environment. Even upto about 15 years back, school children could pluck apples and pears all day long and forego the need for lunch. Today, there remains little of what were an abundance of orchards. The political and economic reliance on Pakistan meant that Kashmiris had to submit to a increasing number of injustices.

A young engineer who joined our conversation informed me of tonnes of marble and logs of the finest wood being (openly) "smuggled" out of the Neelum Valley (Northern-most district of Azad Kashmir) on a regular basis. The destination in almost all cases was Pakistan, with the tacit collusion of the Pakistani state.

In my heated conversation with the Chief Secretary (remember, he's Pakistan's de facto governor here) last week, he was adamant that royalties were being paid to the Azad Kashmir government for electricity that is generated from Mangla (District Mirpur). I'm yet to find any evidence of that.

Despite our new residence resembling a shack (albeit one of concrete), it's self-contained. The major problem being water which has to be stored in containers, as it comes through the pipes just twice a day. My neighbour explains that the pipes serving them are over 30 years old and rusting. The population has muiltiplied by many in that time, yet the infrastructure is still the same. Apparently the previous PM Sardar Atiq was "dragged" to see the water pipes for himself on a couple of occasions. He did what most politicians do: promise yet fail to deliver.

An Indian Muslim writer that I was reading the other day wrote quite a memorable sentence. He lamented that in the Muslim World there was plenty of recognition of the past, yet very little cognition in the present. How society needs to develop and be appropriate to modern modes of thinking. How cognitive thinking should follow up with implementation in the social and political sphere, is ruefully absent in Azad Kashmir. This is what furstrates me and drives me simultaneously.

I realise that I've lost my (Pakistani) ID card. This may prove to be a blessing as I'm keen to disassociate myself from Pakistan in every sense. Perhaps I should be content with carrying a certificate that proves that I'm a State Subject of Kashmir. I'm even seriously considering making an effort to fly out of Kashmir (via Jammu and on my British passport), when I eventually and hopefully re-unite my naani with her siblings. Not a day passes by without me thinking about this issue. After all, it is what has kept me here since April 2005.

I met the chap who looks after the cross-LOC applications, a few days ago. Just like his colleagues in the Assistant Commissioner's office in Kotli, the pile of applications in front of him iis way too much for him to handle. It is litttle wonder that the people of Kashmir have to wait years before their permits are ready. Many applicants have been seperated from their families since 1947, others since 1965and some since 1990. All wait years to travel what in most cases is less than a 100 kilometres.