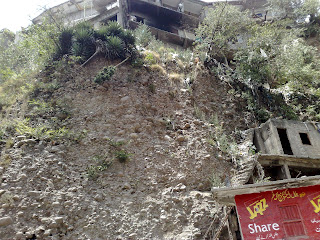 I learn that the electricity employees strike did in fact end last night. Protracted negotiations between them and the Chief Engineer outlasted midnight. Needless to say, the strikers have all gone home for well-needed if not well-deserved recuperation; except that I learn that they contented themselves with a verbal agreement. Perhaps psychology came into play and the striker's weariness got the better of them. Omitting me from the discussion is also a cause for suspicion.

My pursuit of financial independence continues with a visit to a private language college. The relevant member of staff to deal with is not present but a discussion with his understudy is lengthy enough. I ask him whether or not they conform to a syllabus. His response is in the negative. Most people are simply concerned with improving their grammar and becoming fluent in the English language. They're not too bothered about how they get there. An exception is the MA English course which they teach on a sub-contractual basis from the AJK University. Anyhow, I'm asked to return on Saturday with a CV to meet the proprietor of the college.

As I'm keen on saving as much money as possible, I spend a lot of time walking. This enables me to maintain a modicum of fitness. I've lost my way a little since my cycle accident in Dhirkot. The good news is that my fractured shoulder is well on it's way to recovery and I'm rearing to start light physical training. The idea being: the fitter I am, the more energy I have to help others. Countering the mental anxiety that has engulfed me these pst few years is a much desired bonus.

I've been advised by a lawyer to report my lost ID card at the local police station.

The SHO (Station House Officer) is keen to have a detailed chat with me. This always brings me into my element as I relish every opportunity to pitch my ideas as well as my experience over the past few years. If structures of the state can be swayed to adopt fresh thinking about their environment, I would consider that to be half the battle won. By the end of our converstion I can see that the SHO feels as if he doesn't know what has hit him. So be it too!

With respect to the ISI he pleads ignorance and states that they have their own method of working which is distinctly independent of the local police. The young constable who writes my report can't figure out why I would want to live in Kashmir and forgo Britain. I candidly replied that if he can't figure out the potential of Kashmir and the work that needs to be done here, he should spend a bit of time on educating himself in his spare time. He lamented that, that was amongst the biggest regrets of his life. "As long as you have life, you have opportunity," I re-assured him.

I'm given news by an uncle of mine late in the evening that Zardari is coming to Muzaffarabad. Furthermore, that he'll be addressing the Legislative Assembly. My initial reaction is one of utter disgust. "Why is he coming here? As far as I'm concerned he's utterly unwelcome," I hissed at my uncle.

I understand that he has over 22 serious cases relating to murder, extortion etc. hanging on his head. Political expediency has waived those charges, albeit temporarily I hope. It's a matter of time before the Pakistani public's conscience picks up again. I feel they're spending too much time basking in the glory of the re-instatement of the Chief Justice.

I've a habit of avoiding daily newpapers, which are invariably part of the power structure andd originate in Pakistan. The headlines never fail to fluster me whenever I inadvertently glimpse at them from time to time. Hence, my ignorance of Zardari's impending arrival on the 6th ( a day after tomorrow). There are already plans for a protest and plenty of issues brewing under the surface.

I realise it's imperative that I make some preparations too. However modest they may be.
at June 08, 2009