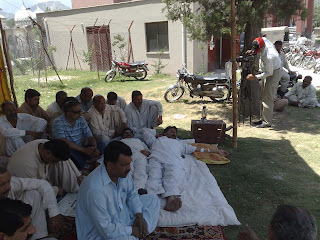 Yesterday was a well spent day of working from home...I am hearing reports in urdu newspapers that the chief secretary and the AJK PM are sounding out through newspapers that "foreigners" are creating problems in Azad Kashmir. Someone sugests to me that perhaps they're responding to my frank meetings with them over the past week by scaremongering the public through newspapers.

I am very conscious of my financial limitations. I always have been since I set foot in Pakistan in April 2005. Now that I've set up my stall on the net, I'm hoping financial help for my cause(s) will soon start trickling through. In the meantime, I've got to find a source of income that will at the very least pay for my children's necessities, feed my wife and then myself. As a bonus, if I can gain enough income to pay for my communication needs and the occasional use of my vehicle in dire necessity, I'll be content. A wise sage once told me that the richest people in the world are those that are content. That's what i aim for: contentment.

I'm aware that the English is in great demand here (as it is in most parts of the world). Further that in the Muslim World, there's a massive void in the education system in terms of social science. I'm fortunate enough to have a reasonable groundind and grasp of both.

First stop is the Azad Jammu and Kashmir University which has it's main campus in Muzaffarabad. While I wait to meet the VC (Vice-Chancellor), I take a close look at the institution's prospectus. What immediately comes to notice is what i suspected. It's very thin on social sciences; what they do teach is narrowed down to islamiyaat and political science is more or less confined to pakistan's national ideology (Which has developed as a source of confusion for mosty Pakistanis over time). Learning and understanding how the Europeans transformed their societies from what were essentially feudal and aristocratic to where public opinion increased it's influence merits a closer look. If budding social scientists of the Muslim World are allowed the necessary political space to conduct contextual research, this could act as a catalyst for positive change.

I also noticed that most lecturers in the Arts had a relatively weak (meaning local-Pakistani) academic background compared to those that taught the physical sciences, some of whom had post-graduate degrees from abroad.

Meeting the VC was a damp squib after all. Despite my elaborate pitch, he was having none of it. Noticing that I didn't have a Master's degree, he nwas adamant that a First Class Masters was a pre-requisite to teaching in his University. Despite a universal acknowledgement that there are always two routes into teaching: One being formal and the other informal (based on real-life experience/s) he refused to budge. Not one to give up, I suggested that he give me the syllabus for any of the dozen or so courses that I felt competent in and then examine me after a week. Even if I had to write-up a Masters dissertation, that too I could complete in 7 days.

My final question to him was: How many words is a student expected to write-up for a Masters dissertation? About 100 to 200, he replied. That was the juncture where I felt compelled to get up and leave.

On my way out, a local who had graduated from the University gave me an example of the geology department in the University. They were totally out of sorts in the wake of the earthquake of October 2005. Even though foreign NGo's committed a healthy amount of expertise and funding for Research and Development of the Geology Department, little of substance transpired. The bulk of funding was allegedly pocketed by those responsible and the Department is more or less in it's pre-earthquake condition.

As I proceeded towards my new home, a novel event occured. Two young men on a motorbike approached me at speed and braked within a couple of inches of my injured leg. "Could you please tell us who you are sir?, one of them somewhat politely enquired. "There's two things I'm obliged to ask you first," I proposed in response. "Who are you and where does the sense of recklessness emanate from?" I assertively demanded. He mentioned that he belonged to a "sensitive organisation" and that he was from the Punjab. I confirmed that he was from the ISI and explained that a person from Punjab had absolutely no right to ask someone from Kashmir and in Kashmir as to their identity. Furthermore, the ISI was the source of many of the problems that have crippled our society. Regardless of his protestations about some "bad apples" upsetting the cart and that his organisation existed for people's protection, I advised him to return to Pakistan and serve his country where his country needed him most, to leave us alone and if his organisation were keen to talk to me, that they should apply in a formal manner through the local police, give me time to have a lawyer present and that their representative must be of senior rank, ensuring he has the capacity to converse with me.

Today's blog has yet another story to tell.

Monday witnessed the beginning of a hunger strike by employees of the electricity board. Camped outside their office in the Turkish built secretariat, today was the third day and by this stage, three of the strikers were on life-saving glucose drips. They had been struggling within the legal framework for over 2 years for equal access to promotions (in line with other departments) and they felt singled out for discrimination.

This compelled them to form a union and take the action that they had. Thus far, they had provoked a less than modest response from those concerned. I decided to phone the Minister for Electricity Mr. Riaz Mehmood. He was an English "import" and former Overseas MLA (Member of AJK Legislative Assembly). He is widely considered to have bought his way into political power and a dark cloud of fraudulent dealings hangs over his "English" source of income.

Mr. Riaz response was somewhat nervous and definitely deceitful. He claimed ignorance over the employee's hunger strike as well as their demands. This despite advance notice to his ministry of the impending strike, two years of litigation in the AJK High Court as well as Supreme Court and a litany of applications to Mr. Riaz's secretary. I calmly explained that if these employee's just demands were not met and if god-forbid any of them were to perish in their struggle, the public would hold him accountable.

This episode evoked a response. He instructed the Chief Engineer to hold talks with the strikers with a view to coming to a settlement. Interestingly, I was requested by one of the main strikers to pardon them for asking me to not take part in these discussions. I merrily obliged (It wasn't my problem after all-I was just trying to help as much as I could) but strongly suggested that they get a written confirmation of acceptance of their demands.

Staying on the subject of electricity, I've no option but to try and upload my daily videos since the beginning of my cycle ride from a netcafe. Constant outages don't help at all. My ride began on the 2nd of May, today is the 3rd of June and I've only uploaded videos upto the 6th of May so far.
ref. www.zorpia.com/sahaafi

Another dilemma to add to the many generated thus far.
at June 08, 2009