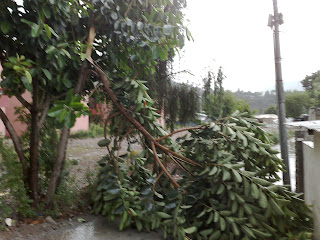 It appears that virtually all members of the capital's administration is just concentrating on one job: The impending arrival of the godfather Zardari. Most of the civil servants that I spoke to held himin as much contempt as I did. They were just doing the job that they were paid to do of course.

I spent most of today in the PM's secretariat, watching the comedy in sheer amazement and almost disbelief. Billboards had been put up to welcome the creep, banners professing Kashmir's accession to Pakistan and it's undying/unwavering support hung almost everywhere in the adminstrative complex. Amidst all the hustle and bustle, underhand deals between the public and civil servants continued unnoticed.

Before planning my mode of resistance for tomorrow, I decided to make a formal request to the AJK Government to meet the "President of Pakistan". The Chief Secretary's office assured me that the job of allocating time was the sole duty of "Secretary Services". He was in a high-level meeting with the Chief Secretary and others, discussing the nitty-gritty of the "President's" arrival. So I had to wait.

When I finally got to meet him, I was a tad surprised that he hailed from Mirpur. I was expecting a Pakistani civil servant. Nevertheless, a jovial chap he was, clearly well fed and typically having extended family in Bradford. He enjoyed my dissertation but regretted that he wasn't the person who deals with making appointments with the Pakistani President. That the Chief Secretary's office had erred in their judgement. Noticing my displeasure and in a bid to clear any "doubt", he phoned the chief's office and questioned them as to why they had effectively put me on a "wild goose chase". My doubts weren't cleared as far as I were concerned, the Secretary Services smile had much anguish anguish hidden beneath it. Antics of bureaucrats almost always included obfuscation and appeasing the public, where the public's reaction mattered.

Meanwhile, I also had the opportunity of meeting somebody in his office who described himself as a/the Commissioner. His tone was too conservative for my liking, his lack of imagination (or use of it) cut out any thought or prospect of reform for our people. He felt they were destined to doom and so what? who cares? He appeared overly keen to invite me to his office some day for a lengthy chat where I presume he would make a determined effort to "convert" me. Apathy is a great disease, I thought to myself.

Talk of one leads to another. In steps an old hand of the ISI. the most memorable part of his conversation related to a couple of political rallies he witnessed a while back. On one particular day, A very large public gathering was organised on behalf of the Muslim Conference Party (The ruling and dominant party in Azad Kashmir-till now anyway). Great speeches were made and ostensibly huge support and backing was generated from the public at large. A few days later, a similarly large rally was organised by the Pakistan People's Party at the same venue. The ISI officer noticed that many of the organisers and rabble-rousers were the same people as a few days before. Upon enquiry, he was plainly and simply told, "That day we supported the Muslim Conference, today we are with the PPP! Heavy laughter in the room followed; the only person who didn't laugh was I.

Back at the Chief Secretary's Office, another couple of hours were eaten while civil servants hurried to finish the preperations at hand. On of them took some time out to fraternise with me, taking great pains to explain how he was one of the very few bureaucrats who stayed aloof from corruption and who done most of their work on their own initiative. Great achievements over a long illustrious career working with one high official after another. Ultimately, after persistent enquiry from myself, they meekly informed me that meeting the President would be well nigh impossible. He would be spending a few short hours here and too many isues were on the agenda. "We are not organised or efficient or even intelligent-we're just akin to donkeys biding our time," lamented one of them upon an impulse of self-reflection.

As the evening progressed, I busied myself in drafting a letter for the IG (Inspector General) to inform him in advance of my intended action tomorrow. I also bought the essentials required for a placard and continued to think of how I could carry out a targetted, albeit individual protest that would grab the attention of the "godfather".
at June 08, 2009