0939hrs:
Day 171 at Maqbool Bhat Shaheed Square - Dadyaal.
Attendance = 100%
Punctuality = 63%
107 days on time or early of 171
Punctuality surplus = 3 minutes
Punctuality Consistency Status = 3 days
Thankfully, our punctuality deficit has reverted back to a surplus. Let's hope it stays that way until the end of this 365 day outing at the Square.
....
I felt prompted to watch the following video, given that it is that time every 4 years where a considerable amount of the world's population turns their attention to a sporting competition:
I was then tempted to write the following notes, a part of which I entered as a comment to the video above, indicated in brackets below:
FIFA World Cup
Qatar
Globalisation
(Arabs deserve a respectable place in the world. They have a history and have contributed to global civilisation. They are not all terrorists or spoilt brats with nothing to contribute to the world.
Qatar has proactively used this and various other initiatives to show that they can be as much a part of the solution to humanity's problems as any other nation or people.
Al Jazeera and other institutions have been developed to build this 'soft power'.
Obtaining the opportunity to host the most watched global event in the world at 300 billion US dollars is a very prudent investment.
In the backdrop of the most lucrative and popular sport in the world, we can bring some sport and support similar fair play in geopolitics.)
We began trying to obtain membership of FIFA since the day of the World Cup final in Russia 4 years ago. We were ignored by everybody without exception, despite even asking one of our co-citizens based in Zurich - global headquarters of FIFA - but unfortunately it seems that he ignored us too, although it is possible that he may have a valid reason.
Incidentally, we understand that the whole World Cup event has been organised by a Swiss company. This is human capital export of the highest order. We, in Jammu Kashmir & Allied (areas) - JKA - have that capability too but we deny each other, sometimes even before the world denies us.
We - the people of JKA - are losing out because we are unable to organise ourselves as a people representing a country - in the manner that citizens of more than 200 countries are able to do - albeit the global geopolitical chessboard may have been a bit kinder to most of them. For example, citizens of India and Pakistan or even those of Nepal or Bhutan - presuming that most of them are proud of their national identity - have a head start ahead of us. Although for obvious reasons India and Pakistan have an unfair advantage over us.
Google, Facebook and Twitter are earning billions globally including from us in #AJK and throughout #JKA . Yet, they are paying 0 to our territory because we do not have an 'organisational framework' in the shape of a de facto country, to take advantage of opportunities the world is offering us.
Our concept of neutrality in foreign relations can be described as giving each country equal opportunity to engage/trade with us.
Our mutual economic relationships with other countries should be aimed as being 50:50 in terms of mutual benefit. We do understand that this may be difficult to achieve, given that global capital flocks to where there is greater opportunity. However, our neutral status and distinct geography can be an enticement in itself, that may confound traditional economic thinking.
There are countries that are already engaged with our territory and there should be some others that we proactively engage with - as many as have already engaged with us - in order to then create a level playing field for the rest of the world to engage with us.
We want to see #AJK or #JKA host the FIFA World Cup at some point in the next couple of decades, to enhance our 'soft power' credentials, if not anything else.
....
at November 23, 2022 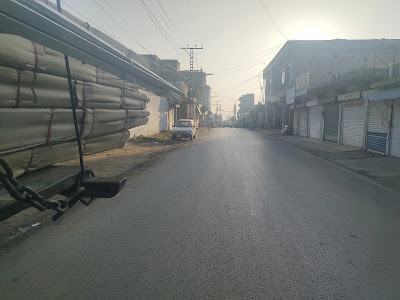