Engagement with the public has been incessant today. It has no sign of receding until at least midnight at the earliest.

The following relates to a speech by Beverly Hill at a conference organised by Kashmir Global Council, at Middle East Institute in Washington DC on November the 11th 2021.

She is a doctor by profession, an human rights activist, a politician and a close friend of Hilary Clinton. She is very well connected in official circles and has travelled the world including India on official invitations. She also commands great respect amongst law makers) 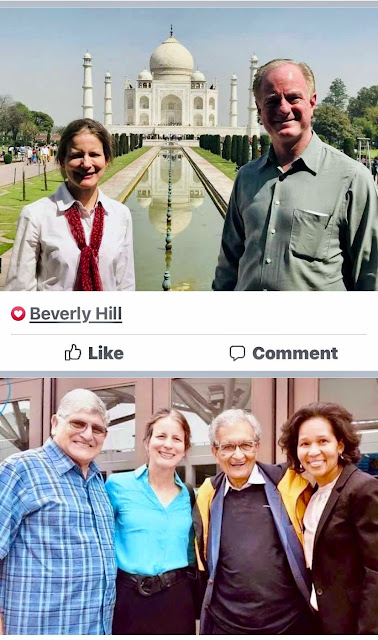 Here are some excerpts from her speech:

“I stand here to express my solidarity with the people of Kashmir and endorse their call for independence."

"It is time to free Kashmir from a binary choice, forced on it in haste, by a departing colonial overlord. Nearly 75 years have passed since Great Britain left. The question is no longer whether Kashmir should accede to Pakistan or to India, but rather, how can Kashmir release itself from all powers to become an independent country."

"I will continue calling upon my fellow Americans to make US foreign policy consistent with our democratic principles."

"We will continue urging Congress to create a pathway toward Kashmiri independence."

“When elephants fight, it is the grass that suffers. Let us send the elephants home.”

An Urdu translation of her speech can be read below:

The whole event can be watched here:
(Update: 15/11/21)
Reactions to the above were being felt where it mattered:
So much so, that I had to make the following comment myself:
Well, I consider this to be progress in some shape or form. I hope these events connect to a sustained meaningful dialogue amongst all shades of opinion in Jammu Kashmir & Allied areas (JKA), whereby a measured national narrative encompassing all concerns within this territory can be easily interpreted in the 4 capitals quoted above - but include a 5th namely London - where the genesis of this issue can be located. Thank you Beverly for taking these steps.
(Update: 18/11/21)
A week after this event Beverly Hill made the following comments embedded below:
.......
at November 14, 2021

2110hrs:  I didn't finish the missing historic links of Sharda translation until 0900hrs this morning. I had been working on it intermit...

A Journey from Subject to Citizen