1846hrs:
Day 52 at Maqbool Bhat Shaheed Square - Dadyaal.
My punctuality deficit has decreased to 539 minutes.
If I keep this up, I will get there.
....
In the afternoon began another sit-in protest at this very square. JKNAP and their student wing JKNSF have various members (c. 24) including their president Liaqat Hayat in jail for struggling for their basic rights. They intend to conduct this sit-in protest between 1600hrs and 2000hrs (4 to 8pm) every day. Their demands as written in the following Urdu banner are:
1) To end all taxes on electricity bills.
2) To provide free electricity to the inhabitants of 'Kashmir'.
3) To unconditionally release all political prisoners including Liaqat Hayat, Javed Jaan, Samad Shakeel and the president of the trader's association in Thorar Saajid Azam.
4) To restore subsidy on flour and end inflation.
For the record, this was my second visit to the square today and hence I consider it appropriate that I provide a timed snapshot of my entry here too:
....
While we wait for other media outlets throughout the globe to sprinkle some attention on our woes, the following article by an Indian news outlet - News Intervention - has taken some initiative once again. It should come as no surprise that their website cannot be directly accessed from Pakistan or its controlled territories:

The other side of the coin is that India has banned JKTV since February 2020:

We have sent the following message to the Indian government:
In the spirit of open information for all leads to solutions for all, India should lift its restrictions on JKTV.
Whoever has the most productive narrative for JKA should emerge as guide for governance and public policy.
Otherwise IndoPak acrimony will continue to slow down civilisational needs in this region.
AJK Public Agency Note #004427072022
End of note....
Meanwhile, anybody who tries to open JKTV in India or in its controlled territories will probably receive the following message:

....
You can sense how critical the situation is in AJK from the following tweets:

The public of #Thorar in #Rawalakot have asked the #AJKPolice to retreat back to their respective stations. The public throughout the territory have taken a stand #AJKWideProtests #JKASovereignty https://t.co/mmSkUXMZVI

Remaining in Poonch (which has always been the epicentre of public resistance) but moving from Thorar to Kaigalla: it is important for the sake of the Pakistani army that they don't end up in the wrong place at the wrong time. We want them to leave our territory peacefully, by phased arrangement and with dignity; if possible:

We did say the people of #AJK will resist occupation of their land & reclaim #JKA in a democratic, ethical, legal and peaceful manner. A #PakistanArmy truck is halted in #Kaigalla today while slogans related to uniformed terrorism r chanted #Rawalakot #SecurityJKA #JKASovereignty pic.twitter.com/66kYaa9kgd

Various social media platforms keep us engaged and Twitter Spaces is no exception. This morning I engaged in yet another space hosted by JKTV:

While the discussion above was concentrated on Yasin Malik's incarceration, hunger strike and subsequent hospitalisation; the noble lady featured below thought it opportune to discuss the alleged 'benevolence' of the Pakistani State, even at this very late stage when Pakistan is hell bent on emulating - India's 5 August 2019 operation - to consolidate AJK into Pakistan's federation. Hypocrisy must have its limits and hence we've featured her, so that we can try and avoid being stung by fake religious sentiment every time we step forward to claim our rights:

This is what I wrote after the programme:

This sister of ours Rehana Ali conducted a zealous propaganda campaign against me while I was in jail (Flag case Mirpur 2020/21) and is using the same references that she rejected about me to speak up for Yasin Malik in jail!

All 3 links above appear to have been conveniently deleted. What remains of her Youtube channel are the 2 videos below. Analysts who've described Pakistan's existence as being solely on the basis on hatred for India can obtain some confirmation from these 2 videos:

How much of the following can she & other zealous pro-Pakistani propagandists grasp?

Pakistan is a hard-wired endemically corrupt country and society, that uses Islam as a currency to practice hypocrisy by default, for usually very short-term bestial benefits.

No doubt there are good and forthright people there too but they are a very small and almost invisible minority, for all practical purposes.

We can no longer tolerate Pakistanis or those who favour JKA's or Kashmir's accession to Pakistan; to use international legal references to try and:

1) Twist arguments in their favour while omitting important information. Telling part of a true story and concealing those truths which prove their complicity or failures.

2) Feigning sympathy for others while deceiving them. Pretending to donate while looting the other. Advertising their supposed generosity while stifling, ridiculing or threatening those who calculate their loot.

3) The human rights they claim to campaign for are the very human rights they deny to their own people - let alone us - while we are their neighbours who have extended all liberties and benefit to them for 75 years, thinking they are our Muslim siblings fighting for the Ummah. They fooled the people of Hindustaan pre 1947 by stressing that Islam is in danger when the slogan 'Muslims are in danger' did not work. For reference check Muslim League polling results in 1946 and those prior to raising the 'Islam in danger' slogan.

4) They teach us by rote to hate Hindus and Jews in particular while cosying up with anybody and everybody for their own marginal benefit, including Hindus and Jews.

Hence, my assertion that Pakistan has got to be the most significant conspiracy against Islam and Muslims in the past 1,500 years.

2) Its existence thrives on hatred and conflict and has thus affected over 1.5 billion people of the Indian subcontinent and many others too, apart from its neighbours.

1) Criticising Pakistan does not mean we favour any other country in the world and think atrocities do not happen elsewhere. AJK Public Agency maintains geo-political neutrality in the strictest sense and would afford Pakistan every facility that it would offer any other country.

2) I'm simply narrating and warning of the implications of its existence in its current form. There's no reason why it cannot re-invent itself and play fair with its own people and the rest of humanity.

3) Using religion - and any religion for that matter - for selfish, lustful, spiteful or deceitful purposes has never sustained itself for long throughout history. It always ultimately fails because people get fed up of hearing the same 'divine' excuses to decades old unabating problems. Pakistan's debt crisis is one such example. Singapore produces more wealth than Pakistan despite being less than 1/1000th of its size and with a population less than 3% of Pakistan's.

4) This is a plea for introspection - especially for Muslims - many of who think condemning non-Muslim crimes and concealing Muslim crimes is a service to Islam. Many Muslims also think Muslim governments can necessarily provide better security, welfare, justice and opportunity to Muslims compared to non-Muslims. That non-Muslims are occupiers and Muslims are saviours, which has proved true in some cases historically but it is by no means a universal truth. What is truly fascinating is that even Western born and bred Muslims commonly hold such beliefs as above.

If I cannot convince my Muslim brother or sister about him or her denying my right to exist (read proposed 15th Amendment AJK) then how do I convince any level headed impartial observer that I have been exclusively denied my right to exist by non Muslims?

My Muslim brother and sister won't even let me speak because he or she conveniently pretends to be my advocate when he or she knows that I am a more able and fruitful advocate of my own condition.

Besides how can a dubious 'claimant' of a piece of land be an advocate of the 'titled' landholder?

How can you teach us to hate & kill (proxy propaganda & militancy) another 'claimant' while making love and mutually beneficial agreements with that other 'claimant', at the expense of the 'titled' landholders?

The Pakistani State's hypocrisy has come full circle. 75 years of this 2 nation experiment has generated ample empirical evidence to re-evaluate: 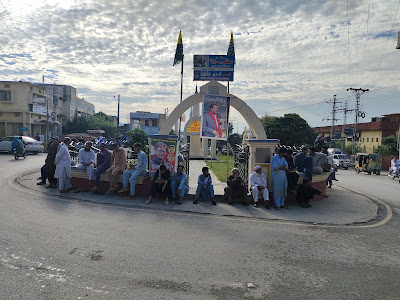