Despite the dreary drizzle of the past few days, life and public interest have to gallop on regardless.

A lot of attention in AJK is being centred on Kotli at the moment, where 19 citizens of Jammu & Kashmir (including one each from the Valley of Kashmir and Gilgit Baltistan) were summoned in court today. The hearing was postponed (to February the 13th) - unsurprisingly - as the police had not completed their preparation, apparently!

Here's a video reaction by some of the accused:


Here is the summary of the charge sheet: 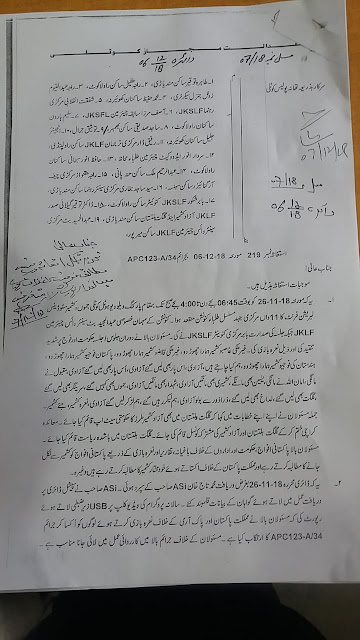 This is an English translation of it:

The State via police station Kotli

(Hand-written signed note on left-side)
Your Highness
The script of the complaint is totally correct and complete according to the list of papers. Thus, the report is requested for presentation.

Rationale for the complaint is detailed below:

That on the date of 26/11/2018 between the times of 6:45 in the day to 4:00 in the morning, at the location of the parking area of Valley View Hotel in Kotli, Jammu Kashmir Students Liberation Front held their 11th 'Central Constant Struggle Convention'. Special guest at the convention was Abdul Hameed Bhat senior vice-chairman JKLF while presiding over the event was Baabar central convenor of JKLF. The aforementioned responsible (liable to be questioned) individuals heavily criticised the government and army during the procession/convention and chanted the following slogans:

(In the official document, all the above slogans were written as part of a sentence. They have been aligned thus for ease of illustration)

All those responsible (liable to be questioned) said in their speeches that Gilgit Baltistan should also be given an Azad Kashmir type system of governance. That the Karachi Agreement should be abolished and a joint council set up between Gilgit Baltistan and Azad Kashmir. That the state subject rule be (re) established in Gilgit Baltistan. All those responsible as mentioned above made rebellious speeches against the Pakistani army, government and institutions. Through sloganeering they repeatedly demanded that the Pakistani army should vacate Kashmir and continued to be provocative against the State of Pakistan while demanding an independent Kashmir etc.

That the diary of 26/11/2018 was handed over to Muhammad Taaj Khan ASI (Assistant Sub-Inspector) for the purpose of enquiry. It followed that ASI Sahaab (polite title in common use) took action on the enquiry as reported in the special diary and filed witness statements. A video clip of the annual programme in a USB (Universal Serial Bus - storage device) was confiscated and a report generated whereby the aforementioned (accused) in their sloganeering against the State of Pakistan and the Pak Army had provoked the public and perpetrated the crimes APC 123-A / 34. It would be appropriate to take action against those responsible (liable to be questioned individuals accused) according to the aforementioned crimes.

1) Anything in brackets is not part of the Urdu text and is used for ease of explanation.
2) The year has been written as 2018 for clarity whereas throughout the official Urdu document it            was written as ‘18’.
3) The translator has focussed on finding as close an English meaning to each Urdu word as                    possible, whilst refraining from using additional words for emphasis and to avoid exaggeration.

This is one of the summon slips sent to the 19 accused: 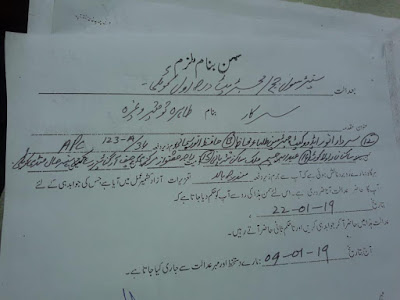 This is an English translation of it:

At the Court of: Senior Civil Judge / Magistrate Class One Kotli

The State Versus Tahira Toqeer etc.

(Note: The 19 accused were mentioned in batches of 4 or 5 in separate summon slips. The 4 accused on this particular slip are quoted ad verbatim)

(Note: The entry spaces for tribe and address have been written over)

Since we have come face to face with a complaint that you have committed the offence(s) under clause - as mentioned above - for which the penal code of Azad Kashmir has been enacted, whereby it is necessary for you to respond by presenting yourself in court. Thus, in light of this summon you are ordered to appear on (date): 22/01/2019 at this court to respond and continue to appear until the next judgement (of this court).

Signed (on behalf of the court)

Notes:
1) Anything in brackets is not part of the Urdu text and is used for ease of explanation.
2) The year has been written as 2019 for clarity whereas throughout the official Urdu document it            was written as ‘19’.
3) The translator has focussed on finding as close an English meaning to each Urdu word as                    possible, whilst refraining from using additional words for emphasis and to avoid exaggeration.

Finally, here is a description of the offence codes used:

123-A. Condemnation of the creation of the State, and advocacy of abolition of its sovereignty.

34. Acts done by several persons in furtherance of. Common intention

Many thanks to the British Empire for continuing to breathe in the statute books of the Indian sub-continent and beyond.

In the evening, I was supposed to participate in a JKTV programme on the same subject but alas, the technology at my disposal wasn't up to the task:

Meanwhile, we should keep an eye on developments in Jammu too. Those who were forced to migrate from what became AJK are referred to as PoK migrants there. Their demands require empathy as well as examination on our part:

SOS International is an organisation described - in the hyper-linked article above - as representing displaced persons from Pakistani-occupied Kashmir (PoK).

Its chairman Rajiv Chuni said the PoK displaced persons were demanding their "due rights":

- Implementation of the whole package passed by state cabinet in October 2014, facilities to all displaced persons at par with Kashmiri Pandit migrants and reservation of eight assembly seats.

- Seeking permission to visit religious places in PoK, inclusion of 5,300 PoK displaced families living outside the state in the ambit of package passed by the state cabinet and return of cash deposits of the people kept with the J&K Bank in Mirpur (PoK).

We even have a photo: 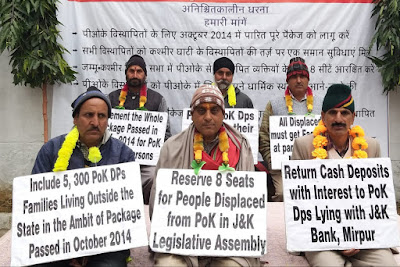