This morning while returning from my walk in Sharda:

Catching up with our close neighbours in Gilgit Baltistan once again:

I shall reproduce the series of tweets in the above referenced thread here, for the convenience of my readers: 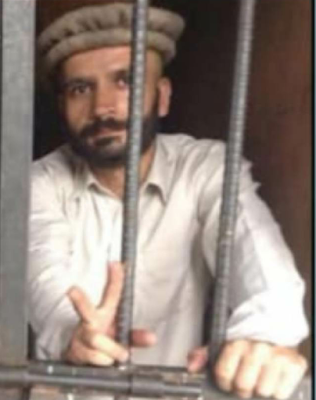 In 2010 a natural disaster killed 19/20 people and wiped out a couple of towns from the face of the earth at #Hunza #Gilgit, over 6000 people were permanently displaced and about 30 thousand people of #Gilgit were affected.

This natural disaster at Attabad created an artificial lake now named #AttabadLake and the displaced people requested the authorities to demolish the artificial lake as it was increasing in size and it would take in some other towns with the passage of time.

This #artificial lake still stands and another natural disaster can wipe out the whole valley.

When no solution was provided by the authorities, people of #GilgitBaltistan started #peaceful #protests. During the protest at Aliabad in August, the security forces opened fire on the civilians and killed a father and son.

The #SecurityForces with the help of the premier intelligence agency of Pakistan started raiding the houses of the people who started this agitation and accused them of being indian agents.

=>"Its very common to call every Kashmiri an Indian agent if he speaks his mind."

This story is just about one person so I'm going to leave all other separatists out of this discussion and I apologize for that too.

Comrade #IftikharHusainKarbalai is a member of a #GilgitBaltistan separatist movement known as Karakorum National Movement who have the following very basic demands:

=> which Paksitan has not given to any part of the Occupied Kashmir territory including #AJK and #Gilgit #Baltistan.

End of #CulturalGenocide, mega-dams, trophy smuggling, illegal hunting (this is done through army and white folks pay up to 100K USD for these hunts).

End interference from china and open historical routes towards, #Ladakh, #Srinagar and #Badakhshan .

If #GB is part of #Kashmir why has Pakistan ended the State Subject Rule and why is Pakistan changing the demography of Gilgit Baltistan. Restoration of this rule is mandatory.

Iftikhar Hussain was arrested when he was protesting the killing of a father and son by the security forces. During this protest, they were demanding to investigate the killing of innocent civilians and to end army-backed state terrorism.

Army and police torture cells, detentions, and FOS. They were demanding the end of Black Laws like ATA and NAP.

After arrest, Iftikhar Husain was trialed and falsely convicted while a total of 71 years of imprisonment was handed to him by Pakistani Anti-Terrorism Courts.

Let me be clear Iftikhar Hussain has never carried nor preached to fight against army with guns. He believes the issue of #GilgitBaltistan is a political issue and should be resolved by dialogue and not with gun. Yet he still received 71 years of imprisonment.

Just to be clear. This is the story of one man, there are many others like him

After seven years, in an additional FIR another 19 years of #imprisonment was added onto his 71 years of Imprisonment. So, a total of 90 years of imprisonment is given for peaceful protests, demand for basic human rights and a chance to represent our own selves.

Welcome to our HELL

While working this morning, across the river Kishenganga I noticed a children's assembly taking place. The following thoughts assembled in my mind: