This is a powerful quote written by Wusat Ullah Khan - a venerable Pakistani BBC Urdu journalist - a few years ago and widely circulated since: 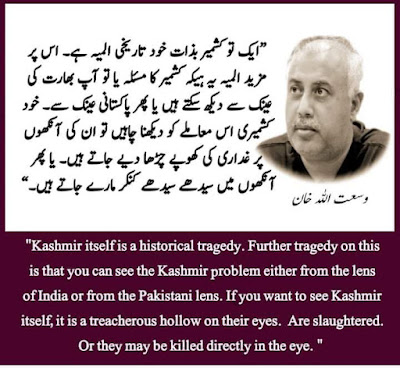 However, the translation into English is very poor, indeed it seems to be the product of an online translator. There is still a distance between human intelligence and artificial intelligence.

For one, Kashmir itself is an historic tragedy. On top of that, this tragedy is deepened when you can only view the dilemma of Kashmir with an Indian lens or a Pakistani lens. If the Kashmiris wish to see this dilemma (themselves) then their eyes are stitched with the label of treachery. Or if not, pebbles are targeted straight into their eyes.


I have been sitting in DC Kotli's office for the past few hours, waiting for clearance to proceed to Tithrinote for a friend's wedding. Yes, today is also perhaps the most critical day in AJK's history yet. As explained yesterday, the Pakistani State's approach to security and freedom of movement in AJK, has also incensed what have been already been infused sentiments of the local public, since India's move to de-operationalise Article 370 in its controlled part of Jammu & Kashmir.

In the past, I remember many an expatriate complaining that the people of AJK do not claim their rights in the manner of how the people of the Kashmir Valley do. Well, they were wrong then and are wrong now too, as AJK has now become the centre of attention in J & K and the wider neighbourhood.

There were reasons why such activity was not apparent. The Pakistani media has always been shy of highlighting anything on the ground in AJK, while the roving control of Pakistan's agencies always played a significant part too in tempering our people's sentiments. Using our own policemen to stop our public's movement towards the LOC is an affront to both of us. Their sentiment is no different from ours.

Now that our people understand why Pakistani media highlights whatever it can (and more) on the Valley of Kashmir but never covers any identical activism here, many people now plainly say: "We know that they (the Pakistanis) have sold us too!"

As for the Pakistani agencies operating in AJK, they are under unprecedented pressure too. Any wrong move by them in this environment of high sentiment could prove more back-breaking for them than it is already.

The security of AJK needs to be gradually handed over to local law enforcement. The people and government of this territory can ensure that no untoward incident occurs through mutual understanding, not least because we are both stakeholders. When Pakistan doesn't even have a claim on this territory (their own admission) then it is puzzling to understand why they persist in taking responsibility for security here in AJK. We want to avert the further loss of life.

What has happened today in Rawalakot, Hajeera and all approaches to the LOC at Tithrinote in Poonch is yet to be fully confirmed. There is a communications blockade a la the Valley of Kashmir here too.

What is clear though is that a lot of our public in this region are still on the streets and have no intention of returning home anytime soon.

The situation in AJK remains very tense and volatile:

Thousands of people from different districts of Azad Kashmir are marching towards Tetrinot, LoC today. This video has just been uploaded from Rawalakot city. People are charged. Violence may erupt if govt tries to stop them. Local and int'l media needs to cover it. pic.twitter.com/c8GBzGTwmz
— Frontline Kashmir (Back-up) (@Fkdotpk1) September 7, 2019

Thousands of protesters who converged towards Tithrinote today have been prevented from moving beyond Dawarandi, where the public have decided to convert their activity into a sit-in protest. Meanwhile, those who had already reached Tithrinote or who are residents there, were in anticipation of their co-citizens converging there and were all prepared to welcome them with garlands. They are also conducting a sit-in protest. So we have 2 very large sit-in protests only 6 kilometres away from each other and the LOC, barely a few kilometres from Poonch city, on the Indian-controlled side of J & K.

Someone commented that the Pakistanis are keen not to give their partners in crime (the Indians) any trouble. So, their argument is: "We are stopping you from crossing the LOC because the Indians will kill you." In other words, in order to stop the Indians killing you, we may have to kill you ourselves!

This bizarre predicament provokes me into chanting,

Udhar tum (You there viz. India) Idhar hum (Us here viz. Pakistan)
Ab Jammu wa Kashmir me nahi chalegi, nahi chalegi
(Is no longer acceptable in Jammu & Kashmir, not at all)

Meanwhile, the sit-in protest at Thaler Bridge, Kotli was dispersed in the evening by the use of tear gas by the AJK police. In response, some members of the public retaliated with stoning the police from ridges above. Public anger continues to simmer late into the night as their sit-in protest travelled back into Kotli city, at Shaheed Chowk.

The Pakistani State has much to answer for, not least for creating unnecessary rifts between the public of AJK and its police.

By midnight, I still could not get hold of DC Kotli, otherwise known as Dr. Umar Azam. He is playing cat and mouse with me just like Raja Farooq Haider.

As life moves on from one scene to another, it is important that we remember - for the sake of posterity and more - what happened on this day. Here are a couple of FB posts which captured footage on this historic day:

Here's a final angle, which is taken from within Hajeera: