The confrontation between the Pakistani narrative and the internal narrative in AJK is going to get more intense by the day:

The map is of all 10 districts in AJK. From South to North:

Today, we have managed to reclaim a 90% success rate in daily blogging this year (2019).

Last year was a drastic improvement on all the years before, since this blog came into being in 2008:

We understand that many of our co-citizens as well as the net connected world in general use other more popular platforms for putting out their story e.g. Facebook, Twitter, Instagram, Wordpress etc.

However, I prefer the functionality of this platform and it is my understanding that any aspect of my work can be referenced or pinpointed here, relatively easier than any other social media platform available.

Since yesterday, we've been hearing of rumours that the tribal Pathans (who 'helped' capsize the region of Jammu & Kashmir in 1947) are returning once again to Muzaffarabad. Here is footage from Abbotabad Adda (Bus Station) last night:


Here's further footage of them, with captions in English this time:

Last time when they attacked they provide a way to indian and pakistani army to enter in #Kashmir.


Unsurprisingly, this story is getting a lot of coverage in social media throughout AJK:


These Kabailis (Tribesmen) even held a press conference in Muzaffarabad today. They didn't forget to mention that Kashmir - both sides - belongs to Pakistan, in their opinion. Here's some video footage of the press conference, courtesy Dunya News: 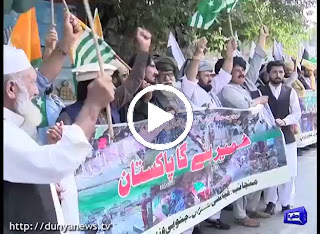 So, this is aggression on the part of Pakistan. The Qabaili (Tribesman) who also happens to be a politician clearly said and I paraphrase: Both divided parts of Kashmir belong to Pakistan. He also equated the Pathan tribesmen with Pakistan, Kashmir and Muslims.

What is their intent?

The timing of this tribal visit is not incidental. It is also clearly State sponsored.

We need a direct forum with the UK on this matter, talking with Pakistan has always ended with silence and of late with bowed heads on their part.

The British empire had George Cunningham as Governor of NWFP (KPK today) when the forbears of today's visitors drum beat their way from the tribal areas - along the same Braarkot entry point in J & K in 1947.

The Pakistanis can no longer be controlling our police or our civil defence...they may well be leading us into another religious identity war......we need a local IGP (Inspector General of Police) for a start. We cannot have a repeat of 1947 except in reverse.

Initiatives for peace, dialogue and tolerance of distinct national(istic) narratives exist throughout J & K. The States of the world and global civil society should help us recognise these internal narratives, which are being violently suppressed by India and Pakistan.

We could also approach this regionally but at least one of India and Pakistan will have to play 'ball'. Which will it be?

In a personal capacity, I've had plenty of interactions with Pakistanis throughout my life and have only a few fond memories compared to the majority of those I remember for their intolerance, chicanery and use of Islam to cover their tracks.

I maybe biased on some way but I swear I had good relations with all other nationalities. I don't even remember anybody ripping me off except citizens of Pakistan, although it is possible one or two such crimes were committed by my co-citizens of AJK. Well, we have been controlled by them for 72 years.

I remember my Indian Gujerati and Bangladeshi friends in particular. They were always so hospitable, tolerant and never tried to trick me into anything for personal benefit.

Given the security scenario in AJK and what increasingly seems to be a not so subtle attempt by the State of Pakistan to promote freelance fighters to cross the LOC en masse, the best I can do at the minute is launch an online poll to remove the lent officer, under whose presumed command our AJK police are made to act against public opinion and public interest in AJK. A local civil intelligence mechanism and civil defence operating under the command and control of a local IG could help thwart this overbearing war narrative:

Having spent almost 14 and a half years on the ground in #AJK , in the interest of peace in #JandK The IGP AJK must now be an aspiring citizen & State subject of Jammu & Kashmir State forthwith.

Answer with Yes, No or Don't Know (DK) before commenting please...

(Roman Urdu translation of above):

A note from history:

It isn't all sweet when AJK or POK is discussed in Delhi but this could be an exception:

MMA (Mixed Martial Arts) fighter Faisal Malik originates from Kotli. He made his entry today in an 'Azad Kashmir' flag. He won the bout too!

In such an heightened environment where the internal narrative of AJK is crossing swords with the Pakistani narrative, some wonder why the Pakistani media isn't giving Faisal Malik any coverage, when they acted differently to when Amir Khan won a similar title. Is it because Amir Khan originates from Pakistan?

Meanwhile, here's Faisal's next bout for those of you interested: