This is monsoon season in what is already quite a cool environment here in Rawalakot. This is how it looks during the day: 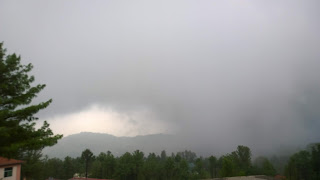 Here are a couple of links which enhance our theory that much of what happened in 1947 during the transfer of power from the British Indian Empire to India, Pakistan and the creation of the Jammu & Kashmir dispute may have been rushed by the outgoing empire but there was nothing unplanned about the manner in which they departed:

New Clause. - (Ruler of State may exclude application of provisions as to water supply.) (11 Apr 1935)
https://www.theyworkforyou.com/debates/?id=1935-04-11a.1417.4&s=Kashmir#g1420.3
...the whole of the machinery for settling disputes hanging in the air.
My hon. and gallant Friend the Member for Wycombe (Sir A. Knox)
mentioned the very dominating position in which the State of *Kashmir*
stands in regard to water supplies. Already there has been a dispute
between the two Provinces of the Punjab and Bombay in regard to water
emanating largely from that State of *Kashmir*, and I...

Orders of the Day - Government of India Bill.: Fifth Schedule. - (Composition of Provincial Legislatures.) (8 May 1935)
https://www.theyworkforyou.com/debates/?id=1935-05-08a.992.4&s=Kashmir#g1032.1
...submitted to the Joint Parliamentary Committee suggesting that at
some date there would be a federation of Moslems comprising Baluchistan,
Sind, the Punjab, the North-West Frontier Provinces and *Kashmir*, and
it was proposed that with them was to be federated Afghanistan. Such an
arrangement is not in accordance with our traditional ideas of Moslem
loyalty, and would be quite inconsistent...

Here in AJK, we are suffering from that legacy which the United Kingdom of today consistently absolves itself of any responsibility to address. Leaving us at the mercy of a Pakistan that has yet to invest in the art of governance after more than 70 years.

Meanwhile, the sky in Muzaffarabad looked rather more active as captured by our co-citizen: