I actually wrote most of the following post the day before yesterday.

Such is my lifestyle that if I'm ever out in the field (in public) to cover or attend some event in public interest, then heavy engagement with others combined with travel through urban dust, makes it difficult to maintain that daily momentum of a diarist.

(Day 293)
The basis of identity or the concept of an 'ID Card' as a measurement tool for governance and aggregator of public interest.....is the theme of an article revving up.

Meanwhile, the Pakistanis seem to be doing everything to disgust public opinion in AJK and GB. Fayaz ul Hasan Chohan is a name that will not go amiss for a while. He has a tendency to pick up speed in speech and not know when to brake and who or what he has hit on impact. 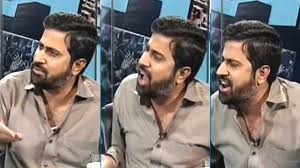 Fayaz ul Hasan Chohan is the provincial minister of Punjab for information and culture in the PTI government. He lists as number 6 of his areas of interest on his twitter account as: "Establishing a tolerant society".

His notoriety to abuse others with illogical arguments - at speed - created a sharp hike in media attention towards him. One of his many pointed threats against the prime minister of AJK - Raja Farooq Haider - can be paraphrased as follows:

The AJK PM's status is so insignificant that even a low-ranking (Pakistani) military intelligence operative could dismiss him - as the prime minister of AJK - by simply dragging him out with his ears. Furthermore, that Raja Farooq Haider was a barking dog who had betrayed his masters that fed him and gave him honour.

That was in the wake of the AJK PM's joint press conference in Islamabad with Hafiz Hafeezur Rehman - chief minister of GB - in response to the Pakistani Supreme Court's decision to disqualify their party leader Nawaz Sharif from the premiership of Pakistan in July 2017. Raja Farooq Haider had said that - and I'll directly translate his words - "if Imran Khan is the embodiment of Iqbal's Pakistan, then as a Kashmiri,  I would have to ponder over what kind of country I'm aligning (acceding) my destiny to".

Mr. F u H Chohan went viral then and is going viral once again today (20/10/18) by repeatedly using the term 'Kashmiri' in a disparaging way.


Beautiful reflection. The #AJK narrative versus the Pakistani narrative. These are like 2 rivers that are facing natural diversions. 71 years of flowing in just one direction was always going to be a fight against diversity of opinion and mis-use of the commodity aplenty: #water https://t.co/fC188exBW2
— Tanveer Ahmed (@sahaafi) October 20, 2018


Returning to today, Mr. F u H Chohan is still making waves on social media, despite an apology of hurting the sentiments of 'Kashmiris'.