It almost feels as if the day jumped on me.

I felt some light relief earlier in the evening when I heard that a local policeman had quoted the Pakistani 'National Action Plan' in the vicinity of Maqbool Bhat Shaheed Chowk, Dadyaal. 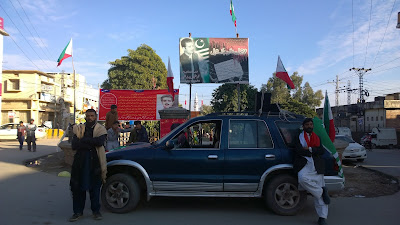 This term 'National Action Plan' is a euphemism for the local AJK administration hinting at how overbearing Pakistani clandestine intelligence operatives; force the former to do the latter's dirty work in protecting Pakistan's 'holy' national narrative on the streets of AJK.

I would like to refer to an article written by Ahmed Rashid for the BBC entitled, "Viewpoint: Will Pakistan mend its ways on terror?" on June the 8th last year.

Here's a particularly poignant paragraph from that article:

"Meanwhile the government has still not implemented a disarmament and deradicalisation programme for militants, which was promised four years ago following the Peshawar school massacre. In official circles there is now talk of "mainstreaming militants", which means allowing them to take part in the political process."

Some of the militants cited above, hosted a Pakistani solidarity with Kashmir programme on February the 5th as well as on the evening before, at this very spot viz. Maqbool Bhat Shaheed Chowk, Dadyaal.

I can only chuckle at the irony.