0621hrs:
Bringing regular - and hopefully - increasingly positive changes in one's daily routine at the age of 50 brings much change in one's body. It feels as if a whole circuit board is being changed.
Long may this continue.
....
I know - we Muslims - get very emotional and furious when it appears that somebody has insulted our holy prophet (peace be upon him). We do it by instinct because of our love and devotion but we must take heed of the following examples from our beloved prophet's own life:

It is indeed. It is also to be noted that - at least in this day and age - it is more likely that non Muslims will understand the universal messages of Islam rather than Muslims themselves. In general, Muslims adopt the faith but not the guidance > complications 4 all humanity.

There was always likely to be a sharp turn in matters related to Malik Waseem Kashmiri versus the State of AJK. I've been studying this 'test case' since the middle of December last year. In fact, I dedicated a folder for this issue and began collecting evidence on all matters related to it, on the 13th of December 2021.

There was a twist yesterday and it is just ballooning as an issue, with more thrust than at any point since Malik Waseem and his family were evicted on January the 17th 2022, from Sardar Singh and Ratan Singh's land in Naluchi, Muzaffarabad; that they had occupied as refugees from the other side of JKA (Kupwara) in 1949. after migrating in 1947.

The man on the ground representing the 'strong arm of the law' was Deputy Commissioner (DC hereon) Muzaffarabad Nadeem Janjua, who used all available tools in the British colonial manual to allegedly detain, intimidate, harass, torture, beat and blackmail Malik Waseem and his family.

He was following orders from the Supreme Court of AJK, claimed he and almost every other asset of the 'governance system' in Muzaffarabad.

Yesterday morning, news reached most parts of AJK that a stolen car (from Lahore last year) with government of AJK number plates, was in the 'custody' or 'use' of DC Muzaffarabad.

According to the following video report by a Pakistani news channel, namely City 41:

From 05:46 in the video....
DC Muzaffarabad is clearly implicated as 'custodian' of this stolen vehicle. The presenter also mentions that DC (Muzaffarabad) implored the owner to not publicly disclose this information; that the stolen vehicle with government of AJK number plates, was found in the DC's 'custody'.
On the contrary, DC Muzaffarabad Nadeem Janjua issued the following press note, yesterday too: 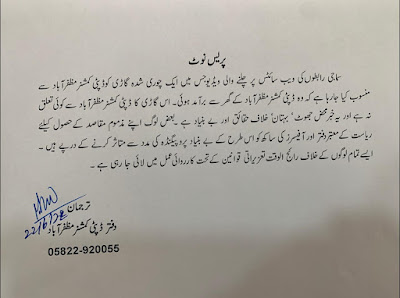 In this press note, DC Muzaffarabad Nadeem Janjua claims to have nothing to do with this stolen vehicle and considers it to be a cunning conspiracy against him and the 'honourable' office that he holds. He finishes by declaring that he is in the process of taking stern 'penal' action against all these 'conspirators'.
I wonder what action he should anticipate, if he is found guilty in a responsible court of law?
Will the endemically corrupt governance system in the State of AJK - even as much as investigate - his alleged 'misuse of authority' on an increasing list of alleged crimes?
Or in the words of a learned co-citizen: Will anybody investigate the Pakistani TV channel City 41?
Remaining with yesterday, DC Muzaffarabad summoned Malik Waseem's elder brother Malik Naeem to his office - on the pretext that he wanted to show him some shelters (fabricated building structures) -  for the alternative land that the government of AJK had arranged, as compensation for Malik Waseem and his family (which incidentally is already disputed by two other parties).
Leaving aside for now the legal basis for this contrived agreement (blackmail according to Malik Waseem), DC Muzaffarabad is alleged to have kept Malik Naeem restricted to the former's office all day and ended with open threats to the latter. Ranging from, "Bring your brother Malik Waseem here or else I will make all hell break loose on your family once again," to "This time I detain your brother, I promise you that you will never ever see him again," to "Go get lost, you will not get any land" and "Go to Modi, where you belong!" etc.
Meanwhile, this is how Malik Waseem may have felt on January the 17th 2022:

When you lose everything!
Devastating and heartbreaking!
Photo AP pic.twitter.com/60cJInWKFQ

Meanwhile,  the following was a protest outside national press club Islamabad today, by students in response to Punjabi students conducting a lethal attack on Kashmiri students at Qaid e Azam University a few days ago. They demanded that the attackers be immediately arrested: