When I'm just engaged in data organisation at home - like I was yesterday - other matters of public interest suffer. Everything seems to be a race against time.

Momentum is building over the arrest of Maulana Sultan Raees, leader of Awaami Action Committee Gilgit Baltistan (AAC-GB). He's also been unanimously nominated by various wings of civil society in AJK to be their declared representative in policy matters where AJK and GB converge.

In our opinion, he is being victimised by the Pakistani State for attending a seminar in AJK, in particular.

We appeal to all democratic and justice-loving people to protest against the arrest of Maulana Sultan Raees, who chairs the people's Action Committee (AAC-GB-AJK) which comprises of several political and religious parties (and groups) from Azad Jammu & Kashmir (AJK) and Gilgit Baltistan (GB).

Both territories are being controlled by Pakistan that has discouraged and disrupted communication between the people of two territories (GB and AJK), which were both parts of the United States of Jammu Kashmir until 1947, when India and Pakistan clashed over this territory, thereby forcibly dividing it.

The only crime of the arrested leader is that he attended a seminar held in Mirpur (district capital of AJK) by the Azad Jammu Kashmir Syllabus Action Committee, chaired by this writer.

We have been campaigning for the inclusion of Jammu Kashmir history into our national curriculum here, which is also controlled by Islamabad.

We believe that it is the right of Kashmiri children to study their history like all other nations.

The update above was supposed to have been written yesterday. Events do move forward faster than one individual can possibly find the opportunity to write about.

In this inter-connected world, many activists simultaneously engage on addressing the authorities' cruelty, at home and abroad.

As a consequence, Maulana Sultan Raees was released on bail from Gilgit jail this afternoon, after 4 days in captivity. 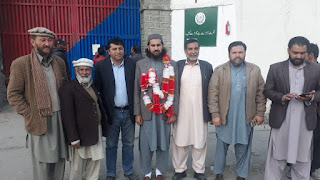