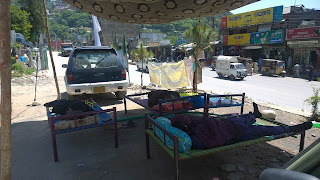 Sunday is sometimes a typical languid day, as tradition has determined for many a territory throughout the world. Preliminary talks between Mahmood Ahmed Musafir and the AJK administration yesterday, developed a thaw between the 2 adversaries to some extent.

Our people are wonderfully understanding and helpful when they want to be but terribly cruel and apathetic otherwise. Those who genuinely work in public interest and consistently prove their mettle over the years, do get their fair share of the limelight and praise. However, the standards that the public at large and fellow activists expect of them can be considered as harsh or super-human even. For example, someone who spends their own money in public interest is expected to refrain from mentioning it in public. In other words, crying and complaing are not allowed.

The other 'micro' aspect of our collective behaviour is that the public expects 'the' activist to refrain from centralising all attention around him (or her). Other members who undoubtedly play key roles in advancing public interest, rightly expect their contribution to be acknowledged and discussed. On my part, I hope I can address these weaknesses in my person, which will undoubtedly advance public interest even further...

Meanwhile, talks with the AJK State and representatives of Pakistan's federation will possibly take place tomorrow or the day after. We remain camped at the revolutionary 'base camp' on Bank Road - Muzaffarabad.
at April 22, 2018