Into the final stages of my preparation for a 'do or die' hunger strike in Muzaffarabad. This will be the banner describing my rationale. 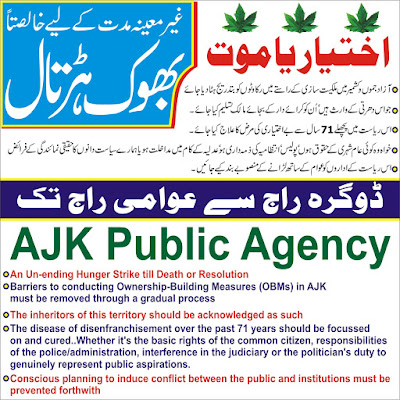 In a territory which describes itself as a democracy and bases its existence on securing the right of its people to decide their future, there appears to be zero scope for peaceful activism which can lead to resolution of matters in public interest. Hence, a 'do or die' scenario emerges whereby one either commits the 'powers that be' to seriously engage or.............

And here is that letter for the international community:

The Territorial Enigma that is AJK

This is a letter addressed in particular to the:

Subject: An indefinite hunger strike till death or resolution in Muzaffarabad - AJK

By: Tanveer Ahmed (An independent researcher/activist based in AJK, un-interrupted since 2005)

I’ll begin by quoting a UK citizen in recent correspondence:

“I concede, as someone very comfortable with a Pakistani identity but unhappy with Pakistan’s political culture, that AJK is a sham democracy. This is not in dispute, numerous Pakistani journalists have reported on the status of your State as not “free”. Numerous books and NGO reports exist to that effect.”

By 2018, the human race has evolved to an unprecedented level of sophistication in communications technology and consensual governance. Despite which, I am writing this letter to emphasise that the territory which I’ve inherited along with my co-citizens in 1947, remains amongst the most deeply regressive and enslaved, in conscience as well as in physical structure.

Having lived in the UK for about 28 of my 46 years, whatever I have been doing in terms of research and peaceful activism here for the past 13 years, is a consequence of my upbringing in a democratic environment; where diversity of origin and expression were considered to be the binding strengths of that society. Where multiple narratives invoked intellectual curiosity and institutions facilitated economic opportunity, provided free justice based on merit and protected our life, wealth and honour as equal citizens.

AJK is usually described as “Pakistani-administered Kashmir” by the international community at large. Without legal or constitutional basis, its governing system adheres to a de-facto imposed mono-narrative whereby Pakistan’s perceived ‘national interest’ is strictly adhered to. This system is no less fascistic than Hitler’s Germany or Mussolini’s Italy, only that it doesn’t advocate racial supremacy but rather a contorted ‘version’ of Islam, which assumes in its ultimate analysis that only Muslims have an exclusive right to govern and dominate the world.

Western civilisation made a concerted effort to address their dilemma through instruments such as the UN Charter. Britain and other European colonialists gave access to their former ‘subjects’ to enter the ‘mother’ country and participate in their economic prosperity post World War 2. However, what we are experiencing today in AJK is a direct legacy of the British Empire. What the UK enjoys in terms of a tolerant multi-religious society is exactly the opposite of what they left us with.

Those of us who migrated bore fruit while those of us left behind inherited an inhumane structure, whose ill-effects are so deep that one sees no scope for a peaceful resolution, even after 13 years of consistent activism on the ground.

We also understand that the global structure of nation-states necessitates that other countries or global institutions – inadvertently in some cases perhaps – provide no recognised institutional framework for resolution of conflict. Contemporary frameworks only recognise nation-states - irrespective of their legitimacy or otherwise - and do not recognise people or nations occupied. Democracy is practiced in the developed world but not measured when assessing the role of transgressing nation-states in other territories.

We, as a disenfranchised people in AJK want to take control of our own public affairs - on a live and let live basis - not unlike Switzerland which has been neutral between much more powerful neighbours. We don’t want to be dragged deeper into a proxy war between our neighbours, who are essentially fighting over control of our water resources, under the ideological guise of ‘Pakistani nationalist Islamism’ vs ‘Indian nationalist secularism’.

We reside in a physical space just below the highest mountain ranges of the world and lie central to not only most of the world’s population but between various civilisations. It is simply un-natural for us to abide by a mono-narrative whilst continuing to act as fodder to a conflict that can quite easily be resolved by water management technology; a field of knowledge that even the developed Western world has not paid sufficient attention to. Human evolution requires us to be pro-active to avert future conflict.

Our narrative as described above is not merely an individual’s opinion but a summary of 13 years of accumulated collective wisdom, derived from each and every category of citizen residing throughout this territory. We are also proud to have conducted the most comprehensive citizen public opinion survey (in proportion to the population) ever conducted throughout the world, although I remain open to correction if warranted.

In 1947, the last autocratic ruler of this territory - Maharajah Hari Singh - wanted the whole of his inherited State to be a neutral country like Switzerland, where he would transfer all matters of governance to an elected assembly of political representatives while remaining a symbolic monarch, not too dissimilar to Queen Elizabeth of the United Kingdom. When the Maharajah wrote to the Governor General of India for military assistance to quell the tribal invasion from Pakistan, the response from Louis Mountbatten was pre-conditioned with a proviso that when peace is restored in the territory, then the question of the State’s future would be decided by its inhabitants. In 1948, when India made its opening argument in the UN in reference to its complaint against Pakistan, it specifically and category expressed its desire for the State’s future to be decided by its people: whether they wanted to accede to India or Pakistan or remain independent. 71 years later, the people’s will is yet to be considered as the exclusive arbiter of the State’s future.

From historical context to today’s letter - which in all probability could be the last letter that I ever write - recent events in our territory have forced my hand and I am left with no option but to adopt the tool of last resort for peaceful activism viz. a hunger strike till death or resolution. I don’t want to physically fight with my immediate occupier (Pakistan) and I have no bone to pick with the world. I want our political representatives, our judiciary and our administration to be free of external influence and exclusively accountable to the citizens of this territory, which constitutes barely 6% of the whole of the erstwhile Princely State of Jammu & Kashmir. I understand that there is no single member of the AJK Government who can successfully wrestle back our usurped rights. Any politician who tries, is immediately or gradually marginalised. Indeed, the current ‘Prime Minister’ of AJK appears to be suffering from this very predicament.

Two recent events have shaken me and brought me to this juncture:

1)      Naeem Butt – Was a dedicated political worker representing JKLF. He was shot on the 16th of March by AJK police, for peacefully protesting against the mounting deaths of civilians caused by cross-LOC firing between India and Pakistan. He succumbed to his wounds on the 21st of March.

2)      Mahmood Ahmed Musafir – Is a seasoned activist since 1984 who annually conducts a ‘creative’ public event in favour of the basic rights of the citizens of this territory. On the 27th of February, he began a walk for 300 kilometres from one end of AJK (Bhimber) to the other (Muzaffarabad), armed with 32 demands in public interest and accompanied by 3 donkeys and a camel, in search of humans who may assist in creating genuine legislation in AJK. On the 5th of April, Mahmood was prevented from proceeding about 35 kilometres short of the capital Muzaffarabad. The police were directed to forcefully stall his efforts and return him and his animals to his home district of Kotli. He remains in hospital fighting death with life, after the enormous amount of mental torture he was put under. As the AJK Government doesn’t possess the necessary legislative powers to consider his demands, they felt it expedient to brush him ‘under the carpet’.

This pattern of repression, consistent since 1947 motivated me to forego my journalistic career covering other global hotspots and settle in the territory of my birth. Activism in pursuit of public interest in this territory is the most difficult, dangerous, time-consuming and expensive (in terms of opportunity cost) activity to do here. Society as a whole is nurtured, engineered and structured to assist the imposed mono-narrative by only paying attention to issues from which private/individual monetary benefit can accrue. This applies to all walks of life and is precisely what sustains the occupation.

We, the citizens of AJK are in search of humans to understand our plight....and recognition from the outside world that we are proactive in trying to create an appropriate forum to resolve our issues with our neighbours.