I don't agree with various aspects of this gentleman's politics but I consider him one of only two eligible politicians in the whole State of Jammu & Kashmir, to be described as a 21st century politician. His approach is very direct to the public and that's what is most attractive about him:

Friends,plz donate wt so ever you can, so that it is possible for me to fight the parliament election, even if it is Rs twenty or fifty only
A.c no

I'm just finished reading a book written on AJK by a Pakistani writer. It would only be my duty to review it too:

I have received confirmation that both India and Pakistan have come to some preliminary agreement on opening Sharda to the Hindu community of J & K and quite possibly from elsewhere too.

The story was broken yesterday by a Kashmiri Pandit journalist in Delhi:

A whirlwind of attention has focussed on this issue, on both sides of the border between India and Pakistan, particularly today. It has kept me busy for most of the day too. I received further enquiries from various cities of what used to be an un-divided neighbourhood.

The following were quotes I gave on Sharda's re-opening for various Indo-Pak media that contacted me:

"It would be the most significant pro-life measure taken in this region since the end of the British Raj".

"It's positive implications for religious harmony, civilisational diversity, knowledge and wisdom accumulation will be felt globally".

"It could even become the pre-eminent symbol of 'soft power' in the world".

"Forgive the superlative laden description of Sharda but I feel it is warranted".

Here are some essential embeds which can trace the pursuit of Sharda by civil society across the divide in Jammu & Kashmir, in a chronological manner. These aren't the sum of the efforts of course, just an outline of some significant steps along the journey:

The pivotal role driving this whole process forward has been that of Save Sharda Committee Regd. and in particular, the untiring consistency of Shree Ravinder Pandita. Amongst other contributions we cannot forget, is Vinod Pandita's 15 day hunger strike in 2014.

Building a bridge of peace and reconciliation:

Human rights and religion in Kashmir

In Search of Sharda's Famed Mandir in AJK:

A Message for the Kashmiri Pandit Community from Sunna ni Kassi - Sehrmandi - AJK:

A well balanced programme on efforts to re-open Sharda:

JKTV programme on Sharda, in wake of (news of) Kartaarpur Opening:


When Pakistan PM @ImranKhanPTI was asked about Sharada Peeth pilgrimage for Kashmiri Pandits, thanks to my dear friend @rsrobin1. Sharada is our ancient seat of learning and I hope we will be able to visit the holy place without any obstacles. Centre for peace, love & knowledge. pic.twitter.com/w2ZmGiAmaC
— Aditya Raj Kaul (@AdityaRajKaul) December 1, 2018

After Kartarpur Corridor, A Clamour For Opening Route To Sharada Peeth Grows:

A well presented and concise article on Sharda:

Press conference in Jammu by Save Sharda Committee:

Speech at Sehnsa and an introduction to Sharda:

A diverse discussion on the issue of Sharda's re-opening for pilgrimage:

A must watch conversation on Sharda exploration:

Laying of flowers at Sharda Peeth by Civil Society:

Talking to AJK Media in Muzaffarabad about Sharda:

Letter from Indian government to Save Sharda Committee:

This short documentary has been prepared for Kumbh at Prayagraj (Allahabad in U.P) on Sharda Peeth exploration:

It should be pointed out that this is probably the first time in 72 years that a serving head of government in AJK (titled PM since 1975) has visited a non-Muslim place of worship.
.....

Now! We can fast forward to today and here's a prime time Indian TV programme on Sharda. I was able to participate for the last 20 minutes:

There were also a few news items emanating from both sides of the international border. Here are some examples: 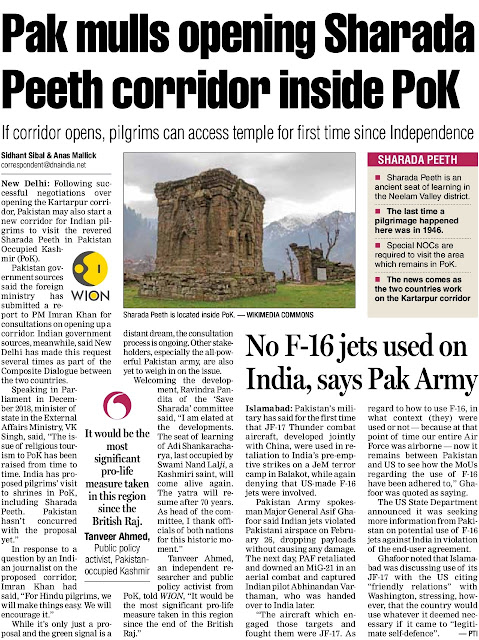 I'll finish off this exhausting entry with this upbeat fb post today by Ravinder Jee: