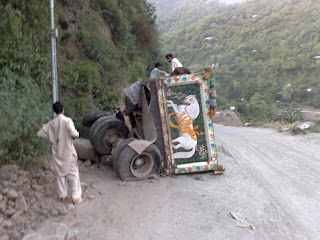 Perhaps for the first time during this trip, I have somewhat of a lie-in; Waking up about 09:30 am. When you consider that at home during the past year, there were times when I woke up at 5:00 in the evening, 9:30 isn't really a lie-in.

Despite the sumptous meal last night, by about Jumaa time (The main Friday prayer) I am in the throes of hunger once again. As I'm keen to move on from Bagh, I had to lie about breakfast and lunch to those that asked. Riding a bicycle on a full stomach is the art of the impossible.

Two weeks into my ride, I finally am able to get a beard trim without having to explicitly ask. when the electricity had gone at the hotel, I ventured out to the bazaar to try and get some vox-pops (voiced opinions from members of the public). One of those that I interviewed insisted that I take the barber's chair.

A clear picture of the public's disenchantment with Pakistan is emerging. One ex-serviceman (a Kashmiri who served in the Pakistan army) went to the extent of saying that, "Pakistan is finished - end of story." Others cited the example of the quality of flour now coming from Pakistan. Not only is it expensive and beyond their means, most of it is also unedible, difficult to bake and once prepared, turns to crisp within a matter of minutes.

I notice an increased interest amongst the public as I whizz passed many of them from bazaar to bazaar. At times I am forced to stop and accept their offers of juice and fruit. Having no breakfast or lunch meant that I had to adhere to their sincere offers.

I decide that I must reach Muzaffarabad by the 17th. An outspoken politican of Azad Kashmir (one of very few, I should add) by the name of Abdul Rashid Turabi (Jamaat-e-Islami) will be in Muzaffarabad on that day and I wish to exchange notes with him.

I cannot complete this daily blog without another case of injustice associated with earthquake relief. In a highly publicised offer of housing donated by the Saudis at the time; many of those who had lost their homes and were genuinely entitled to these "quality" homes were deprived of them. rather, people who already had 3 or 4 homes were given them.

The above is a familiar feature of how society is developing in Azad kashmir.
at May 16, 2009