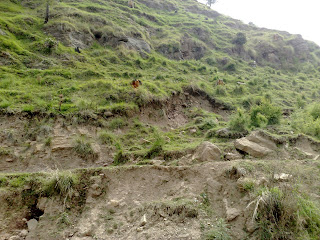 Day 7 of 'Ride for Justice' from Sehnsa to Muzaffarabad:

My ride starts early today, at 6am, except that my rear tyre is punctured once again. Bearing in mind that I'm travelling with 0 rupees, all I can do is ask the nearest tyre repair shop waala (vendor) to pump up my tyre and hope that he doesn't ask me for the standard 5 rupees.

One of my first meetings enroute is an interesting case of human rights: It exemplifies the pawn-making role of the Indian and Pakistani States. Nasir Mehmood s/o Sakhi Mohammed (of Gorah tehsil Palandri district Sudhnoti) went to Indian-administered Kashmir in 1994 on a visa. He decided to stay there and give moral support to the freedom struggle. According to his brother Mohammed Latif, he was never involved in violence. Nevertheless, he was arrested in 1996 and has been in Tihar Jail ever since. I assured the bereaved family that I would contact a couple of activists in Delhi and lobby for his release. I am of the belief that India should open a separate diplomatic channel with Azad Kashmir, bypassing the Pakistanis who for too long have caused India to lump us with them.

The fatal assumption being that the people of Azad Kashmir are synonymous with Pakistanis.

To my relief, the tyre waala doesn't ask for any money and waves me on. Thereby I'm able to cycle for a couple of kilometres before it's time to walk again with cycle in tow. Today's walk is by far my longest daily walk yet, c.20 kilometres. I must've met at least 50 people on the way who insisted that I allow them to put the cycle on a vehicle. On each occassion, I explained at length my purpose of cycling (walking) the distance from my village to Muzaffarabad. The mental anguish of the past 4 years needed to be repelled by physical exertion, while the method of travel that I had adopted gave me maximum exposure to the people of Kashmir etc. etc.

As the time for Jummah (Friday Prayers) approaches and I am yet about 8 kilometres from Trarkhel, I am invited for lunch by a local who I soon realise is a close business associate of a cousin of mine. A small world indeed!

At Jummah prayers, I quite enjoy the moral appeal of the Imam for societal reform yet I'm disappointed that in his after-prayer supplication, he had to wish for the destruction of Jews and Christians. Blaming others for your own collective weaknesses has been a convenient excuse for the post-colonial muslim world, preventing it from pinpointing it's own reluctance to reform and progress.

As I edge closer and closer to Trarkhel (close to the original capital of Azad Kashmir viz. Junjal Hill), I meet a group of young activists who ultimately represent the JKLF (Jammu Kashmir Liberation Front). They show a lot of enthusiasm for independence, have strong public presence and numerical strength. Despite that, they lack in modern political approach, cannot convert public opinion into useful public policy and are content with outlining their (veritable) objectives.

Making a difference in a society which suffers from rampant corruption and lack of merit for it's citizens should have been a primary aim of theirs; sadly, they appear to be waiting for independence before they get to work on the nitty gritty issues that affect people's day-to-day lives.
at May 11, 2009