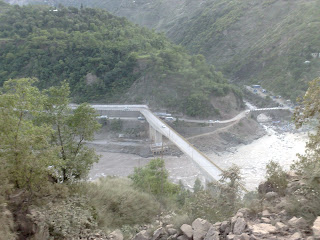 Having visited Sardar Qayoom's house (from the outside) in Ghaziabad yesterday, I began to get some negative vibes from the people around me.

I sensed that the people emitted a harsh aura to outsiders and it should come as no surprise to my reader's that last night was the first time that I had to sleep hungry.

Despite feeling extremely weak and tired, I set off soon after Fajr (morning prayers) at about 6:00 am. The pangs of hunger compelled me to stop every five minutes to rest for five. Discerning my discomfort, some onlookers strongly suggested that I hitch a lift on a passing wagon (Toyota passenger vehicle).

It was too much effort for me to explain my self-imposed necessity of travelling either on bicycle or on foot.

By about 8:00am, having passed the market of Dhirkot with it's seemingly luscious array of edibles on display and without a single morsel to my name since yeterday afternoon's hospitality at the Pakistani captain's mess, even the downhill surge towards Muzaffarabad wasn't enough to lift my spirit.

Indeed, as I race downhill on a bike with dodgy brakes and a narrow track, all that is left for disaster to strike is a heavily-laden truck to venture uphill and hog the narrow strip of road. Without enough space even to use my feet to skid to a halt, I have no option but to utilise the emaining bit of rough that is just wide enough to squeeze my bicycle and I between the bushes and the truck. As I pass the truck at break-neck speed, I am in no position to avoid the rocks and ditch that lie ahead.....

Having been unconscious for about 20 minutes, it takes about 4 to 5 people at the nearby mechanic's yard to drag me to a chair and supply me with a gallon or two of fresh water. They insist on taking me to the nearby hospital immediately. I, in turn insist that they let me rest for about ten minutes so that I can get a sense of where I am.

The accident has most definitely jolted me, cuts and bruises are everywhere. Most disturbing and serious is a fracture to my right shoulder. Everything else appears to be intact though, even my glasses and bicycle have withstood the shock. Furthermore, nobody has stolen any of my valuables, unlike my "Ride for Movement & Peace" in 2007 (ref. www.sahaafi.blogspot.com) when my N95 was stolen. That incident pretty much crushed me at the time.

Anyway, the hospital medics were great. The doctor gave me a pain-killing injection, treated my cuts and bruises and a local bought me an apple juice which I drank flat within 3 seconds (This was my first form of 'food' since yesterday afternoon). I requested that the doctor let me rest in the hospital for an hour or two, after which I would resume my journey. he recommended that i shouldn't; rather i should go home and rest for a few weeks before continuing my journey.

That wasn't possible. I was on the verge of completing my journey. Muzaffarabad was less than a day away. I had covered over 200 kiometres of harsh, mainly uphill, high-altitude territory. The remaining journey wasn't much more than 70 kilometres of mainly downhill and plain terrain. I wouldn't give up now. I needed to keep up the momentum.

My luck had suddenly turned for the better as not only did the doctor insist on non-payment for medical treatment but the nearby mechanic insisted on joining him for food. To top it all off, he got his mechanical assistants to fix my bakes for me.

My experience this morning raises my confidence level sky-high and I feel I'm ready for any outcome that may befall me in the days to come.
at May 22, 2009