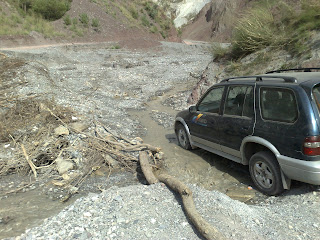 A lie-in is most definitely in order after yesterday's marathon schedule.

I'm pretty much down to my last few rupees as I await some assistance from my family in the UK. Yesterday's conversation with Sardar Karamdad invoked two lessons for me:

1) That I shouldn't thrust my sacrifices on others. If I'm going through hardship or have given up something easy and good for collective ease and good, I shouldn't promote it. Rather that I should work sincerily without anticipation of reward and hope for the best from the Lord above.

2) That one shouldn't necessarily talk about reform with the people of Kashmir. In his opinion, their development has been so stunted that they are just not amenable to reform. They consider it a burden, particularly as the struggle for daily bread is a paramount concern for the poor and the pursuit of ever more refined entertainment and luxury is for the rich. An organic approach is more apt and people's evolutionary instincts will necessitate change with time. Further that when the sharp end of reality hits home, then will people consider reform. No doubt, one must struggle for positive change regardless.

Returning to the grim reality of daily life; yesterday's attempts at finding accomodation were unfruitful. The single property that we saw didn't yet have a kitchen or bathroom. Furthermore, it was perched precariosly on the edge of a hill and would've been a certain hazard for my 3 year old daughter.

Nevertheless, a new day can at times bring new hope. Today is one such example. We are shown a property which is close enough to being described as an environmental haven. Lush greenery surrounds the property, the vicinity is clean and open, fresh air is aplenty and a near village atmosphere completes the setting. The absence of electricity at the time was amply compensated by the aforementioned features.

The fact that I didn't have any money on me at the time didn't deter my 90 year old/retired policeman landlord.

How gracious is the Lord, I quietly exclaimed to myself.

The hotel where we stayed last night and for most of last week was similarly trusting and generous in giving me time to pay up. I knew that a sum of c. 18,000 rupees (c. 150 pounds) had arrived in Kotli for me. I also knew that this would perhaps be the last "donation" from my family. Banks were closed and getting the money transferred to Muzaffarabad would be a struggle that I'll contend with tomorrow.

Meanwhile, I'm relieved that some raw materials for food had accompanied us from the village. I also make use of the abundance of river water to wash my filthy vehicle. It has always been my motto to utilise nature as best as possible and not defy it. How I wish if we could all keep a sustained perspective on nature despite our undoubted advancement and development as human beings. This could help prevent the suffering that ensues from living in an economy which imports a lot more than necessary, forcing locals to pay a mark-up on the 25% inflation rate that has ordinary Pakistanis in a fix.
at May 29, 2009