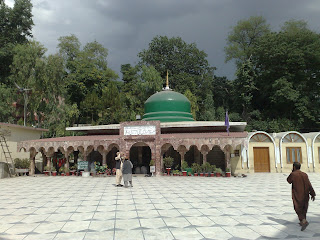 What I regret not doing yesterday is going straight to the Chief Secretary's office which is based adjacent to the Azad Kashmir Prime Minister's Secretariat. As I'm looking to create some sort of impact in a hardened world of dare I utter it...criminals, I feel I need to make it clear to these people, what pains one has to undergo to live a straight, within the rule of law if not a meritorious existence in this system which appears to favour the opposite.

I keep focussed nevertheless and the Chief Secretary's office is startled at my approach. His personal secretary (PSO) assures me that I can expect a response to the following letter by the 26th.

To: Chief Secretary (Representing the State of Pakistan in Azad Jammu & Kashmir)

Subject Matter: Rule of Law / Denial of fundamental rights to the Kashmiri People / nature of relationship between Azad Kashmir and Pakistan

From: Tanveer Ahmed - citizen of the State of Azad jammu & Kashmir and British National

Request: To clarify matters given information below and seek resolution via a consultative process

Dear Sir,
I can confidently assert that the world is unanimous in accepting that nation states have (amongst others) 3 basic duties to their citizens:
1) To provide justice without favour, bias or linkage.
2) To provide security to all citizens viz. life, property and dignity.
3) To facilitate economic activity (via employment or self-employment) failing which a minimum amount of social security should be provided to each citizen so they can subsist.

Having been in Pakistan for about 3 years and in Azad Kashmir for just over a year (uninterrupted since April 2005) I am saddened to point out that none of the above exists in Pakistan. Furthermore, the people of Kashmir (on either side of the divide) do not have unhindered access to basic human necessities such as travel, trade and an independent thought process.

Before I came here, I was enjoying a productive and successful career in journalism. I had broadcasted and wrote for the BBC in Iraq, been the editorial writer and news editor for a national weekly newspaper (The Muslim Weekly), reported from Afghanistan and had other lucrative offers in the pipeline

I gave everything up in the UK to concentrate on understanding the relationship between India and Pakistan, judging that as a critical background to devising a solution for the people of Kashmir (Who have, let’s face it, suffered and continue to suffer, face un-natural restrictions…just because India and Pakistan cannot reconcile between each other).

Despite using all practical and creative means at my disposal, I failed to gain even an inch in attempting to play a positive role in improving the relationship between India and Pakistan. No bilateral organisation/NGO was willing to accept me on board, no media or academic institution was willing to give me any space, to the extent that when I conducted a cycle ride from Torkhem to Wagah in July/August 2007, to promote peace and the importance of movement (ref. www.sahaafi.blogspot.com), I was forcibly evicted from Wagah for the crime of participating in the joy and happiness of India and Pakistan’s 60th anniversary.

I’m sure you’ll agree that if somebody wishes to do good for society/humanity, they devise principles for themselves. One of my principles has been that I confine myself to the rule of law, (that meant not paying any inducements to police or other government officials). At great risk to my existence and as great a societal handicap as one can imagine, I initiated an effort to reclaim 90 lakh rupees for my uncle who had been been stung by a common fraudster since 1992. Despite my principled stance, the legal framework in Pakistan has favoured him at every step as he wobbled and weaved through the legal process.

Even though he happens to be in Adiala Jail since December the 16th, my sources tell me he is quite comfortable there, obtaining all his creature comforts at will. My estimation is that he’s just biding his time before he can access another legal loophole that will pull him through. I’d just like to put a few points on record about this gentleman Bashir (ref. www.yughayar.net):

-He has been considered as a major expert in the property business.
-He has been instrumental in “washing” a lot of black money that has been earned through drugs in Europe and elsewhere.
-He has many commercial as well as residential properties (registered in the name of others)
-He has acted as an entertainment pimp for the likes of Sheikh Rasheed and has relations with Chaudary Shujaat (who may have been instrumental in his Rahwali Sugar Mill scam).
-He has put out a contract to kill me, this prevents me from traveling to Pakistan indefinitely.
- At the outset, the claim was only for 90 lakhs, the minimum amount. Yet all his ducking and weaving over the past few years has been at great cost to me and my family. He was forewarned of additional costs should he act ‘smart’.

The minimum that he has made from my uncle and his numerous friends since 1992 is 12 Crore rupees. That is what I seek; given the weakness of the judicial system and my protestations to a Pakistan foreign Office official a couple of years back, this matter can only be solved via political means (the Pakistani Chief Justice Issue is a perfect example).
-I do not seek this money to go and spend in a Monte Carlo Casino, rather that I wish to utilise the bulk of it for the development of Kashmir, Pakistan. India and Bangladesh, so that the 3 basic duties of the nation state (as mentioned at the outset) can be performed. I aim to invest in media, education, preservation of the environment and administrative/legal reform.
-A final note on this Bashir issue: There are ample examples of where Arabs, Europeans or Americans have been cheated in Pakistan. They didn’t have to be humiliated via the legal system. The Government of Pakistan solved their issues promptly and directly.

Moving gradually away from the personal and back to the collective; I have completed a 17-day cycle tour of Azad Kashmir, starting from my home village of Kokoi to Muzaffarabad (ref. www.tanveerandkashmir.blogspot.com). I found that the people of Azad Kashmir are particularly disturbed at how political/military events are panning out in Pakistan. They feel harshly done by the economic arrangement between Azad Kashmir and Pakistan. In the year 2009, there is yet no linkage with the outside world viz. no international airport. People are forced to accept goods from Pakistan; the rate of essentials is crippling people, the quality of flour is pathetic and the rate exploitative. The list of grievances in this modern age of communication technology is endless and Pakistan needs to get a grasp on the rapid changes that are taking place throughout the world. The Kashmiri people are tired of marginalisation.

Just as I’ve maintained the importance of the rule of law, in equal measure I maintain the necessity of seeking positive change through peaceful means. If you fail to respond to my plea for justice in the next three days, I will have no option but to engage in civil disobedience. Remember, the eyes of the world are firmly on Pakistan. Is it not constructive for you to provide examples of where your country recognises sincere commitments to the betterment of society, which in turn may provide the desperately needed credibility that you seek?

If anything untoward were to happen to me, I would hold you and your citizen Bashir responsible. The over 500,000 strong UK-based Azad Kashmiri community will not show blind faith in you for much longer. If Nelson Mandela could defeat the colonial settlers on the basis of principles, there’s no reason why I can’t do the same with you.

Yours truly,
Tanveer Ahmed (Journalist, Consultant, Activist)
at May 22, 2009