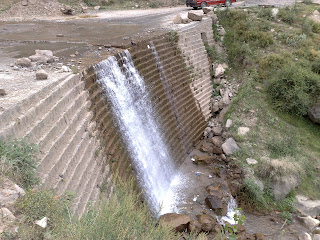 Today has by far been the most exhausting, strenous and testing day thus far. I'm having to rely on what I eat at the wedding yesterday evening, Barring a cup of black tea and a 100 ml drink of apple juice, I had to tow my cycle uphill for more than 17 kilometres. It wasn't until I prayed Maghrib (evening prayer) on the road, after which I made a hearty supplication to the Lord to give me food and rest that immediately as I wrapped up my prayer mat, a young lad with a green turban approached me out of nowhere and asked me to accompany him to his house for food.

In Hajira, as per my habit of not specifically asking for food, accomodation or other necessities, I was unable to get my tyre repaired. Hence, the uphill march towards Rawalakot on an empty stomach.

Not only did I find habitation enroute relatively sparse, I noticed that I wasn't getting as much attention as I had been accustomed to thus far. Rarely did people ask me if they could assist me in any way and it wasn't surprising that it took until evening for my agony to end.

There happened to be a convention in Rawalakot today held by the nascent pro-independence party NAP (National Awami Party). Yes, it could have been useful if I were to make it there. After all, networking and exchanging experiences is part and parcel of what I am doing. Alas, pushing a bike for 27 kilometres on an empty stomach was a bit too ambitious an aim.

I've also noticed graffiti which emphasises the need to maintain and protect the environment today. Re-planting trees is just one of the messages for the public. The environment is of course Kashmir's strongest selling point.

Bearing in mind today's gruelling ordeal, I didn't hesitate for a second when the young man with the green turban suggested that I stay at his home as I tackled the food that he brought out for me.

These experiences are pretty humbling and an opportunity to praise Allah for his mercy. Hope and despair are permanent companions on this ride for justice.

When the price of essential (and non-essential) goods has risen so fast in the past year or so, it's highly inspiring to see people of modest resources feed you as best they can, give you the best room in the house, wait on you and phone you every few days to see how you're progressing.

I just hope I can conjure up some inititatives to make these people's lives easier and more hopeful.
at May 12, 2009