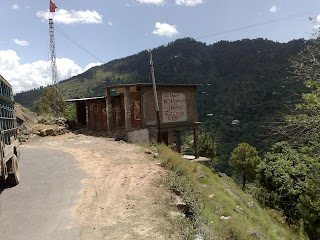 I'll start with a quote that I picked up from somewhere, I can't quite remember where but it's perfectly attributable to this region, albeit perhaps in varying degrees to India, Pakistan and the two governments on either side of Kashmir.

"A government that suppresses opportunity for entire generations cannot expect prosperity or peace."

It's pretty much downhill all the way to Hajira, except that my rear tyre punctures once again (third time now). The fact is, the inner tube and tyre are of very low quality; it's difficult to expect any better from products made in Pakistan.

The subject of lack of justice and merit is repeated many a time as I converse with people along my journey; frustration all too apparent. On a positive note, the literacy rate amongst females is over 75%. They are keen on religious education too. Unfortunately, they are generally unable to impart that education through work as most of them get tied up in domestic life after marriage. Utilising their skills in society (within reasonable limits of course) is necessary for the growth and progress of society. It's hardly surprising that males don't fare so well in education as they are easily sidetracked, they are also well aware that the workplace has very little to do with merit. Rather that nepotism and underhand dealings hold sway over society.

It is little wonder that the independence movement is gaining momentum in Azad Kashmir. Hajira appears to be a stronghold for fervent nationalism as public graffiti amply suggests. A look at the economic relationship between Pakistan and Azad Kashmir may prove illustrative:

(Some of the figures are a few years old and cannot be taken as exact, they should just be seen as a general guide)

Azad Kashmir market; only goods/services produced in Pakistan or which come via Pakistan are sold in Azad Kashmir.
- Direct Taxation ?

Despite all the above, every year when Pakistan "donates" it's budget to Azad Kashmir, endless advertisements in most (Pakistani) newspapers felicitate and thank the Pakistani President and Prime Minister on their "kindness" to Azad Kashmir.

There is a great misperception of dependency on Pakistan. Azad Kashmir has no direct link to the outside world and the cross-LOC movement and trade, restricted though it is, is deemed by many to be Azad Kashmir's first step to Independence from Pakistan.

Pakistan's monopoly meant that an 11kg gas cylinder could sell for as much as 1000 rupees. Cross-LOC trade could possibly import 13kg gas cylinders for as little as 300 rupees.

As people's conciousness, education and global awareness grows; the more assertive they'll become with their political demands. The growth of pro-independence parties despite their legal restrictions on entering the electoral fray give an indication of the future.

This evening I also attended the second wedding of my tour.
at May 12, 2009