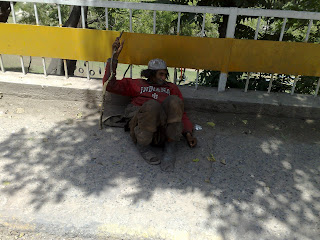 A lot happened yesterday that I hadn't been able to commit to my blog. Most notable was a heavy-handed fracas between lawyers and policemen of Muzaffarabad city.

Meanwhile, I'm on surer ground as far as my injuries are concerned. It is confirmed that the only serious damage is the fracture to my right shoulder. Everything else is cuts and bruises of a non-serious nature. I've to keep my right arm in a sling for about three weeks; which is about the duration of time it will take for the fracture to heal up. As a precautionary measure, I'm also instructed to visit a neurologist to assess my head injuries.

I quite enjoy the 5 kilometre walk from the city back along the road towards Kohalla sans bicycle and rucksack, to the medical institute where I'v been referred. I'm a bit disappointed in the specialist that I'm referred to though. He originates from the valley and despite his undoubtable high level of intelligence, is unnecessarily morbid about Kashmir's future. No amount of enthusiasm on my part encourages him otherwise. I can only imagine that his family or close friends must have undergone major trauma amidst the Kashmir conflict.

As I generate a database of who and what to see and visit; let us re-visit the lawyer-police tension that is threatening to engulf the whole of Azad Kashmir.

It all emanated from a single lawyer procuring a "stay order" (legal terminology for keeping possession of land or property) from the High Court. Others, including the police were ibformed that the said land was government property and thus, law enforcement agencies were instructed to destruct property on the land and re-claim possession. In the agitation that ensued, violence broke out between laywers and police. The latter are alleged to have used heavy-handed tactics including tear-gas shelling and even encroached into the bar, ransacking the premises as they saw fit (legally, no go territory for the police - according to universally accepted principles). Many lawyers were seriously injured and serious civil repercussions including nation-wide strikes have been advocated by the legal fraternity.

This amplifies the point that I've made on more than one occasion earlier: that the people of Azad Kashmir, civilians and authorities alike, struggle to bridge fences and more often than not, differences of opinion and judgement trigger violence.

Steering these people towards consensus and a clear national vision seems an insurmountable task. Nobody has thus far been equal to the task.
at May 27, 2009