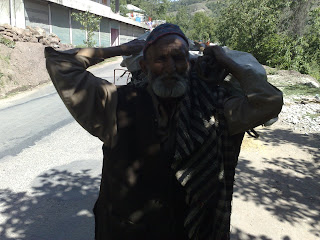 After that miracle last night when food and accomodation looked a certain imposibilty, I'm boosted by that experience as I march on towards Rawalakot, punctured tyre in tow.

The subject of hindu-Muslim relations is brought up in a conversation when an old man approaches me and stresses the importance of facilitating those Hindus who had to flee from this part of Kashmir. He wanted to use the medium I offered him to urge those Hindus and/or their offspring to return.

As I enter Rawalakot, I notice that cities and large townships have a different response to seeing a man with a cycle. As most people are busy trying to earn their daily bread, there is the sense of the impersonal. I refrain from approaching each and every person that I pass, fearing that I might be considered a madman for doing so. Nevertheless, pretexts are improvised on one basis or other to engage the public.

A lot of home truths emerge with reference to endemic corruption in the system. Replicating that of Pakistan and to a great extent India; Government employees are deliberately underpaid (Most of them also pay back-hand lump sums to secure their jobs too!) so that they can extract as much money as possible from the public. For example, a legal clerk demands 300 rupees (c.3 pounds) for each piece of legal document that is supposed to be freely available to the public. The state education system is a shambles: Most state teachers double up as political workers or even treble up as private tutors, leaving little or no time for poor children that can't afford private

education. Even in the privatised world of education, many see that as a money-making scheme; number of children equals set of fees generated, thus
"granting" poor-performing children the requisite grades for advancement is a common allegation.

Delving further, most medicine that is available in the market is not genuine. From personal experience, tablets that I bought for my Naani from a reputable store in Saddar, Rawalpindi were very different from the fake replicas that I bought in my home town (Sensa).

It's important that the earthquake is also touched upon. The government of Pakistan pledged to pay 1.75 lakh rupees (c. 1500 pounds) for each family that suffered material loss. Till date, many have received upto 1.25 lakhs in staggerred amounts of 25,000 / 75,000 / 25,000 with 50,000 still outstanding more than three and a half years after the disaster. The payments that they have received were subject to them having to pay "inducements" of upto 30,000 to government officials for the release of their money.

All in all, who has told me about these home truths? A layman who has a family member in hospital, giving him enough time to lament on his frustrations of living within such an unjust system.
at May 13, 2009