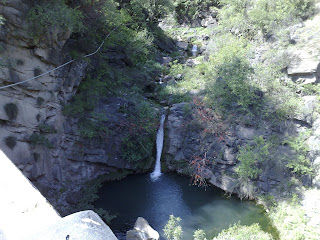 I stay in a mosque that has such an idyllic setting, it's virtually impossible to resist staying in. The drawback that I come to realise later is that the mosquitos troubled me no end last night. Where there's a lot of greenery, all sorts of flying insects follow. This creates an irritable tendency in me which provokes me to snap at some people along my journey to Bagh.

It's been 23 long years since I last had to wash my own clothes (When I was at Maddrassah in the UK). It was a real humbling experience but I enjoyed it no end, gaining the satisfaction of utilising nature to cater to my basic needs, not least the gushing water stream (for washing) and ample sunshine (for drying).

Throughout my time here in the region, a common request from so many young people is to ask me to facilitate their exit abroad. The reasoning is of course mainly economic if not social and political. Woe on that nation or country whose youngsters are straining at the leash to escape the misery that they feel they've been born into. What I always suggest to them is to make an effort (difficult I admit) to improve their country/region through creative activism within a peaceful framework. The people of Kashmir are highly intelligent as I've mentioned before; the region is highly abundant in natural resources and if the rest of the world (including India and Pakistan) allow it to adopt a neutral political stance (a la Switzerland), it could become one of the best performing economies in the world. Then our youngsters will have little difficulty in obtaining visas for wherever they wish to go. Applying for a visa from a struggling or worse, disputed territory is always going to be hard work.

I find it pleasantly surprising to find that there are many other Kashmiris who agree that partition was a massive blunder and in light of Pakistan's current scenario, it would be best for it to re-merge with India. Abul Kalam Azad was spot on in his analysis all those years ago.

The plight of earthquake afectees is a common theme in this region as I've entered that region which was heavily affected. Many afectees claim to have not received any money at all. Furthermore, many amongst the public analyse that there was huge wastage involved in the co-ordination of NGO's in bringing relief to the people. Just what they spent on diesel, covering a particular area more than upteen times rather than doing a comprehensive survey form one single visit. I was truly amazed at how much driver's salaries had shot up post-eartquake; from an average of 3 to 4,000 rupees (c.30 pounds) per month to as much as 75,000 rupees (c. 700 pounds)! One can imagine how much more was spent on other essentials, leaving many afectees gasping for respite.

From the above, it is absolutely clear that the Pakistani government hadn't a clue what was going on (in terms of organisation) and the concept of central co-ordination was abysmally absent.

Apart from a reasonable breakfast at Hummahmohra, I had nothing to eat by about Isha time (9:00pm). I was compelled to ask a street vendor to give me a piece of lime, this I sucked on for dear life.

As no food or accomodation was yet foreseeable, I decided to walk through the city and reach for the final mosque which happened to be a Sufi mosque of Barelvi persuasion. Gathering that I'd been accomodated by Deobandhis in Palandri and Rawalakot; I thought, why not see the reaction of Barelvis to my struggle/plight/mission.

I was given a sumptous meal by a Jamaat-e-Islami friend of the Barelvi Imam and of note within our invigorating conversation were two major issues of societal concern to the sufi Imam:
1) That there was a concerted effort within the Pakistani establishment to martialise Kashmiris and make Kashmir an area of instability, not unlike FATA.
With the Pakistanis judging that their "strategic" aims will be fulfilled thus.

2) NGO's, (particularly foreign) were using subtle means to target women and change traditional concepts of society and the role of women. He qualified his views by saying that subjugation of women was obviously a point of concern but to cajole women into licentious behaviour by stealth was unacceptable.
at May 16, 2009