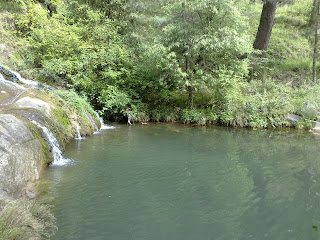 I've sinned again. Last night was the third time that I stayed at somebody's house. I found it difficult to resist because my host was a human rights activist, an active member of a prominent independence party (PNP - People's National Party) and a former political secretary to one of Azad Kashmir's political icons viz. Sardar Ibrahim Khan.

The potential as well as the problems and pitfalls of the Kashmiri freedom struggle were discussed in all it's aspects. He vehemently agreed with me that Kashmir had the potential to be Switzerland x 20. It had a lot more land mass than Switzerland, a lot more sunshine and a much vaster market to target (being in the heart of Asia and being pretty much surrounded by four nuclear-armed rapidly developing economies, namely India, Pakistan (though it's economy will be stunted for a while), China and Russia. The potential of a politically neutral state that focusses on education and economy rather than defence has enormously positive implications for the people of Kashmir.

As I'm now well into my cycle ride; the fact that I've been able to complete my journey thus far without having to spend a single rupee, where virtually evryone I meet is eager to shower hospitality on me and a reasonably clear picture of people's sentiments are made apparent to me, my decision to embark on this adventure into the unknown has been vindicated.

Today's evening is spent with a family whose origins lie across the LOC and who are commonly referred to as Mahajirs. I find that they are perhaps more efficient than other locals in terms of how they utilise resources at their disposal. For example, they till the land at their disposal more productively as well as put an emphasis on their children's education. They commonly live in a joint family system pooling their resources together.

A common yet harrowing story that I've become familiar with is the skinning alive of Sabz Ali Khan and Mali Khan of Mang (an area not too far from where we are) in 1834 by Gulab Singh, who was to become the first Dogra ruler of Kashmir in 1846. At the time, he happened to be a military commander in the reign of Ranjit Singh, who at the time ruled most parts of Punjab as well as Kashmir. The locals describe this event as history's first example of skinning alive of people who stood for freedom and justice.

Views on Pakistan and it's impending break-up also feature highly in many conversations. Common thoughts include the view that Pakistan has never really had a national vision, those who did were marginalised. The nexus between the army and feudal class prevented meritocracy, intellectual progress and inventive ideas and products from entering the market. The fact that feudals to this day have their own justice system with their own arbitrary courts and jails, the manner in which they prevent the education of those people that they control are all examples of anathema in a rapidly progressive and globalised world order.

At this stage, I still have my doubts over whether the Kashmiri people have the capacity, discipline and dexterity to run their own affairs. By the time I reach Muzaffarabad, I hope the picture will become a lot more clear.
at May 11, 2009