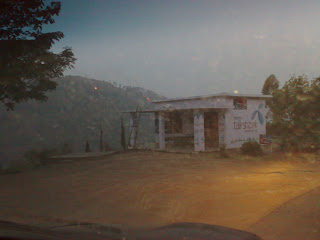 I'm back a day earlier than I wanted to be.

My uncle's peer (spiritual mentor) is coming to Muzaffarabad to meet me and hopes to get an audience with the Chief Secretary. His go-between is another peer Atiq-ur-Rehman, who doubles as a member of Pakistan's national assembly.

Uncle's peer is specifically interested in putting in a few words to reclaim uncle's sum of 90 lakh rupees from Bashir (ref. www.yughayar.net). It has been categorically established that Pakistan's legal system is just too weak to make Bashir see judicial sense. Hence, the political involvement.

I got word from the peer sahib late yesterday afternoon and was engaged in a conference involving my local MLA (member of legislative assembly). He wanted me to be in Muzaffarabad by the morning. A tough ask considering Muzaffarabad is a good 6 hours drive from my village.

Anyhow, it's 3.00am when I leave home; wife, kids and luggage attached.

I'm not fully awake as I drive and with my right arm in a sling, let's just assume it's horses for courses.

When I reach Muzaffarabad's Sangam Hotel (where the peer is residing), I realise it's been a while since I've had the opportunity of feeling the cool air-conditioning assisted breeze of a hotel lobby. I learn from the peer sahib that the Chief Secretary had left for Lahore early in the morning and that their our meeting had been re-scheduled in Kashmir House Islamabad for tomorrow morning!

I took great pains to explain to the learned peer that as my life was in danger in Pakistan, it wasn't possible on any account for me to visit Kashmir House. I sensed his sense of dismay and apologised profusely. I explained that as he knew my uncle perhaps a lot better than I did, that my political baggage with reference to Pakistan may also embarrass him and the Chief Secretary; surely, it was more appropriate that he meet him himself.

The rest of the day is spent waiting for my property man to show us an example or two of what he has sought out for us. A couple of hours are killed in Jalalabad Park which is located directly opposite the PM's residence. My tiredness is killing me; being in the unenviable state of not being able to sleep or stay awake.

The evening is spent with a dynamic lawyer Sardar Karamdad Khan (ref. http://www.hrw.org/reports/2006/pakistan0906/4.htm) who amazes me with his insight and clear conscience. A long chat over dinner at the riverside ensues and a certain rapport is established with reference to work that needs to be done for the people of Kashmir. Not least that they have an independent judiciary free from the clutches of the Azad Kashmir Council that sits in Islamabad and the myopic generals that sit in GOC Murree.

Today's major drawback is the strife that my wife and kids had to endure on my behalf, spending much of the day in the car as we awaited accomodation. It was past midnight that we eventually resorted back to the riverside hotel that was our home last week. Accomodation will have to wait till tomorrow, at the very least.

A final note on my uncle and peer sahib's issue. My uncle phones me in the evening, clearly incensed over my apparent snub of peer sahib's request to travel to Islamabad. Peer sahib was shocked at my letter to the chief secretary (ref. http://tanveerandkashmir.blogspot.com/2009/05/muzaffarabad-day-1.html) and insisted that I comply with the peer's request. I concluded that the peer had poisoned my uncle's thoughts about me. His emphasis on working to obtain his money rather than justice for the people of Kashmir touched a raw nerve in me.

The danger of showing blind faith in other humans (spiritual mentor or otherwise) can defy reason at times.

Only the man who is forced to stand in the sun without water, truly knows how it feels. No-one else could possibly understand.
at May 29, 2009