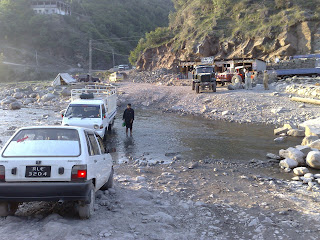 Perhaps I should take my words back about the impersonal nature of interaction in towns compared to villages in Azad Kashmir. I've been overwhelmed by the kindness and time devoted to me by the citizens of Rawalakot.

Last night after evening prayers, I was in a similar predicament to the evening before; no place to stay and no evening meal in sight. That was until I decided to venture out to a mechanics yard to see whether he would allow me to charge my phone. There I met a budding young moulvi who was highly enthused by my motives for riding a cycle to Muzaffarabad. His colleagues where I stayed were equally passionate and receptive to my ideas of how important it was to be all-inclusive about society i.e don't just think about the welfare of Muslims, rather of all sections of society and to make our thinking more broad-based and to conduct original research that analyses modern developments in human behaviour.

Elsewhere, conversations revolved around the inflated price of essential goods. A family of seven needed to spend over 2,000 rupees (c.16 pounds) a month on just flour for making roti (a 40 kg bag of flour that in actual fact only contains only 34-35 kg - another element of fraud - costs close to a thousand rupees, lasting hardly 15 days). The average wage for a labourer per month isn't much more than 5 to 6 thousand rupees a month.

Another disturbing of Kashmiri society is the apprehension that many people show in narrating issues on the record. They cite the notorious hounding behaviour of intelligence agencies who prevent them from standing for truth and justice.

I had the opportunity of making an impromptu speech in the main square that is surrounded by the courts and local administration. The occassion: a public sector employees strike to enforce a promise made by the AJK Prime Minister Yaqoob Khan to give a "big city" status to Rawalakot. What transpired from the push and pull involved betwen the two camps (for and against) was that the people of Azad Kashmir, despite their undoubted high level of intelligence, failed to grasp the nous required for reaching a consensus on matters of socio-political importance.

The moulvis that I stayed with last night had insisted that I lunch with them in a local hotel before proceeding towards Bagh. Therein, I took advantage of having a thorough discussion with a seasoned journalist who conceded that the vast majority of public sentiment centred on an independent Kashmir, yet he felt habits, a false sense of dependency on Pakistan and certain vested interests stood in the way of change. I noticed that he was still using a fax machine to send his daily reports to the various newspapers that he writes for!

While proceeding through the main thoroughfare that takes one out of Rawalakot, I learnt that the San Francisco style road that went down and rose sharpl was "officially" levelled by a bridge, except that the bridge didn't exist. Anotother case of "Funds paid, no bridge made."

Just in case I've failed to adequately mention beforehand, the 130 or so kilometres that I've completed thus far have mainly been covered walking. My rear tyre has repeatedly punctured itself and I'm resigned to finding a new tube. I don't have any money of course and when I suggest to the cycle shop vendor to give me a tube on deferred terms, he rightly explains that he cannot afford such liberties.

I trudge along resigned to the possibility that I may have to walk the remaining 150 kilometres or so to Muzaffarabad. That is until i walk past a mechanic's shop (unaware that I've just past the junction for Bagh), he approaches me and asks why I'm walking with a flat tyre. After my lengthy and long-winded explanation, without a hint of hesitation he takes my bike off me, puts it in the boot of his car and tells me to wait there until he returns with a new tube, fitted and ready to go!

As I ride downhill towards Bagh, I can't help but feel exhilarated at the opportunity of finally riding my bike after many days of blistering labour.

In what has been an eventful day, it should come as a major surprise that a policeman insisted on buying me a drink (mango juice of course) and praised me for standing up for people's rights.

Before signing off for the day, a note on the foxy Bashir (ref. yughayar.net). I got a call from the concerned police inspector that Bashir's lawyer had a date in court. Apparently, with a different judge and a different lawyer defending him, the conclusion remained the same; Bashir was looking for more time!
at May 14, 2009