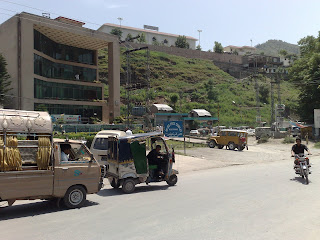 I'm behind in my blog write-ups, at times I'm overwhelmed by people who have taken an interest in what I've been doing and am trying to do.

I decide that I must try and sit in the hotel room today and update myself. I know I'm not writing as concisely as I should and all the ancillary web-related work is suffering too. For example, apart from the first two video clips on (ref. www.zorpia.com/sahaafi) zorpia, I'm yet to post the dozens of video clips that I've generated so far on my journey. The bandwidth provided by my internet service provider is just too narrow to facilitate uploading. I realise the urgent need to source a broadband internet connection somewhere in Muzaffarabad soon.

The past year has admittedly been a pretty lazy one on my part and there are times every day, when I rue not keeping myself organised and up to date during this period. I'm constantly having to play catch-up with the work at hand.

My day gets slightly complicated when a relation of mine who was dismissed from the police force in 2006, turns up on a promise that I made to him in assisting his re-instatement (subject to the rule of law of course).

This marginally affects my expenditure burden but it's important that I maintain the spirit of social welfare that I've set for myself.

While I'm writing up this blog, it persistently dawns on me that Azad Kashmir is effectively a lawless territory, without the slightest hint of accountability. This fact has been repeated to me so often during my cycle journey, if not since April 2005.

A common example of how the legal system operates is as follows: two disputing parties take their mutual issue to court. The police (if appropriate) and the judiciary at every step, milk each party for whatever they're worth. After a few years (as is usually the case) both paries tire of the judicial system and decide to settle out of court. Even then, the authorities may or may not feel satisfied that they've been fed enough: In which case, they pursue each party to clear their dues. After all, a "settlement" has been reached!

When I look at the amount of luxury 4x4 vehicles with government number plates that litter Muzaffarabad, I wonder at the extent of cold-blooded corruption that pervades this city.

Some people talk of the negative fallout on the city of the October 2005 earthquake. That it split families, greed took control of those that were able to source access to funds. Those who were weak, less resourceful or even less selfish missed out. It's a well-known fact that despite Pakistan's afffirmation to be accountable for the use of earthquake donations, no transparency has emerged thus far. Tens or even hundreds of millions (equivalent pounds) have not been accounted for.
at May 29, 2009