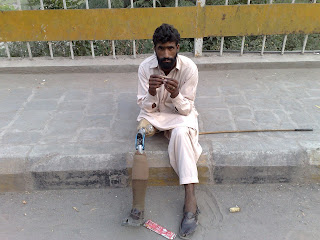 It turns out that the property we have procured may not quite be the blessing that we thought it was. The elderly landlord is asking for a sum quite out of my range and wants a hefty deposit on top. 10,ooo rupees rent per month and 30,000 rupees deposit is not what I had anticipated. Nevertheless, he is kind enough to accomodate me while I search for something more in the 4 to 5,000 rupee range (and no deposit).

The diesel in my car is low enough for me to set out to the city centre by foot and begin my search for a bank that will enable the transfer of my much needed sum from Kotli.

My first stop is an Allied Bank, with whom I have a business account in my local tehsil Sensa. The fact that business has never taken off in these past four years means I have an inactive account. That much I understand, What I can't comprehend is the rudeness that staff members decided to bear on me, when I suggested they modernise and come to terms with the fact we are in 2009.

Resolution comes from the Bank of Azad Jammu & Kashmir. A nascent banking entity little more than a couple of years old. It is essentially local and has yet to be approved by the State Bank of Pakistan, carrying a lot of it's functions via Pakistan's UBL (United Bank Limited). I express my healtfelt hope that Azad Kashmir creates it's own central bank before servile approval from Pakistan comes to fruition (as befits an independent entity, as this side of Kashmir presents itself) to the Operations Manager. In tune with most ordinary Kashmiri aspirations, he nods in agreement.

Now I can cross the road to the centre of Power ( Azad Kashmir's administrative hub which comprises every element of the so-called state - including the High Court and Supreme Court, Inspector General of Police, Prime Minister, CHief Secretary etc.) with some gusto.

Lo and behold, the Chief Secretary is in his office and is "ready" to meet me.

As I approach him, I recognise that he's a quintessential Punjabi, the community that is just about synonymous with the State of Pakistan. I begin by asking him whether he's read my letter (ref. http://tanveerandkashmir.blogspot.com/2009/05/muzaffarabad-day-1.html). His affirmative response wreaked of arrogance and anger. I followed that up with asking him if my uncle's peer had met him at Kashmir House yesterday. A similar reply transpired. By this point, my stomach began to boil like a kettle. I let rip with a range of arguments which clearly amplified the unjust relationship between "Azad" Kashmir and Pakistan. I made it clear that if Pakistan wished to keep the Kashmiri sentiment suppressed under the heaviest of rugs, so be it's prerogative. If disaster and doom for Pakistan hadn't yet become apparent to him, then a little introspection into his attitude multiplied by the vast majority of Pakistan's civil bureaucracy should provide him with at least some clue. He took particular umbrage at me describing him as the de facto governor of Azad Kashmir.

It should come as no surprise that he refused to intermediate between me and the State of Pakistan. Despite clear evidence of the miscarriage of justice and the inability of Pakistan's justice system to provide justice. The Chief maintained that it was beyond his jurisdiction to do so and he refused to write a sentence to that effect on a copy of my letter. We all have problems he reasoned. "So, we allow those who rule us to mint money from us (via taxes) and absolve them of any responsibility to provide what clearly only a government can do, namely provide justice to the ruled?" I snapped.

Taxation without representation, I say.

Thus, there was categorically no scope for the citizens of Pakistan (or it's subjects) to follow the rule of law. With a contract to kill on my head, I couldn't travel to Pakistan and Pakistan's representative in Kashmir wishes to abdicate his responsibility to those he "governs". Furthermore, he suggested that I have trust in Allah and travel to Pakistan! How I wish his superiors had more faith in Allah than in American dollars.

What irked me most was his denial over issues of rule of law in Azad Kashmir. His contention that Pakistan had no objection to the free movement of Kashmiris within Kashmir, that GOC Murree didn't keep control of Azad Kashmiris by force as and when necessary and that Azad Kashmiris had a favourable economic status vis-a-vis Pakistan. To say all the above with a straight face is a talent only a nation on the precipice of damnation can carry through.

Above all, the chief's suggestion that I should feel fortunate to be able to express myself, inferring that I deserve to be locked up or beaten, was just about enough for me to stomach.

As I trudge back towards my residence, many questions flash through my mind. Why can't the people of Pakistan see through the furtive essence of their country's existence? What better example than that of the 2 million refugees of NWFP. On America's insistence and prompted by a fistful of dollars, you enforce poverty, misery and displacement on your own people and then expect the Pakistani public to cough up donations for the mess that you've put these people in!

The Press Club is enroute to my destination and a brief meeting with it's President last week left a lot of unanswered questions. What constitutes pubic interest? If citizens had to pay for news or stories of public interest, what prevented special interest groups or the powers-that-be from manipulating information in the public domain? He wasn't there but a newly opened environmental hut in the same premises evoked interest on my part.

I have witnessed large scale de-forestation of Kashmir. Entire forests had been wiped out by people who sold on the wood for profits. Many claim that a lakri (wood) mafia exists which has it's tentacles deep in Azad Kashmir's polity. An ecological disaster was imminent if this issue isn't paid attention to. The environmental journalist shared my concern and pinpointed the blame on the government, explaining that a special team had been set up to accelerate de-forestation. He went further and described an impending environmental disaster, perhaps of greater magnitude than even the forest fires.

This issue requires greater attention and clarity than what I'm about to put forward. What I will write at this stage is as follows: If this hydro project is carried through, Muzaffarabad city will be virtually drained of water. Tunnels are being constructed for the generation of electricity which will divert a large portion of water from these two rivers. A natural calamity is inevitable, particularly in a region with seismic tendencies.

Pakistan couldn't get a consensus on building Kalabagh dam within it's own frontiers but wishes to fulfill it's need for electricity from Azad Kashmir, irrespective of it's environmental impact, taking full advantage of Azad Kashmir's puppet leadership.

Tomorrow is Friday. I'm gonna have to give it the status of rest day from here-on. The work before me is piling up. Spending a whole day in front of the computer, is the very least that I need to do to compensate for the inability to spend 4 to 6 hours very day. Will I gradually become efficient, will I burn out or will the Pakistanis finish me off.